Broil King has a great reputation in the Kamado Grill industry and with their series of grills, you can say that they are doing just as great. This Broil King Keg 4000 Vs Broil King Keg 5000 post will prove that.

For years, Broil King has been competing with other brands in making Kamado-style grills. They have finally found their signature with their Keg series that is for cooking almost anything.

The Broil King Keg is a series of kamado grills that are perfect for your barbecues at home in the backyard or when going on trips where you will need to cook for a few people.

While they are large enough to cater to about 10 people, these Kamado grills are compact and portable enough that you can bring them anywhere by putting them on the back of your car.

They produce a lot of heat which means that you can also cook anything you want in them. They are perfect for grilling, smoking meat, roasting, baking, searing, and many more.

So here, we will see what differentiates these two amazing grills from Broil King. we will look at the features they offer and see which one has a better chance of helping you cook. 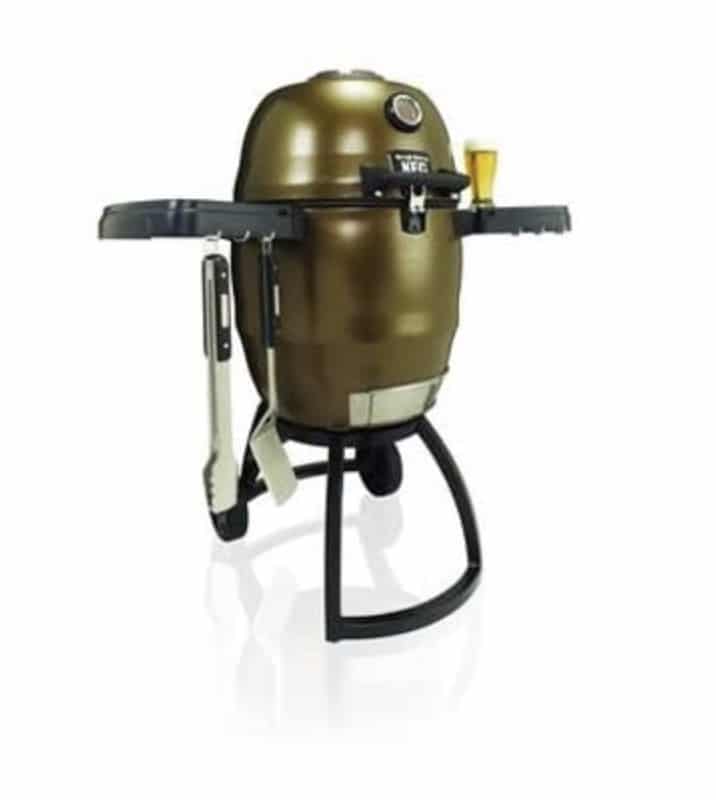 How To Set Them Up?

Kamado grills are usually heavy since they comprise of clay or ceramics. This material helps keep the temperature even to make sure that the heat stays inside the grill.

The material is great but it is also a weakness as it can easily break. If toppled over, there is a high chance that the Kamado grill will crack or break, it also does this with sudden temperature changes.

However, you do not have to worry about these two Kamado grills as they have stainless steel. Stainless Steel is a much lighter material yet durable enough for high temperatures.

When you try to set up these Kamado grills, you can easily transport them using their wheels. There is a dedicated stand for these grills with wheels to move them anywhere.

The setup is also not an issue since these grills often come assembled. You only need to make way for the space you need for the Kamado grills to set them up properly and safely.

You cannot just put them beside flammable objects because although they are insulated, the grills can produce a lot of heat when you open their lids so keep them out of danger. 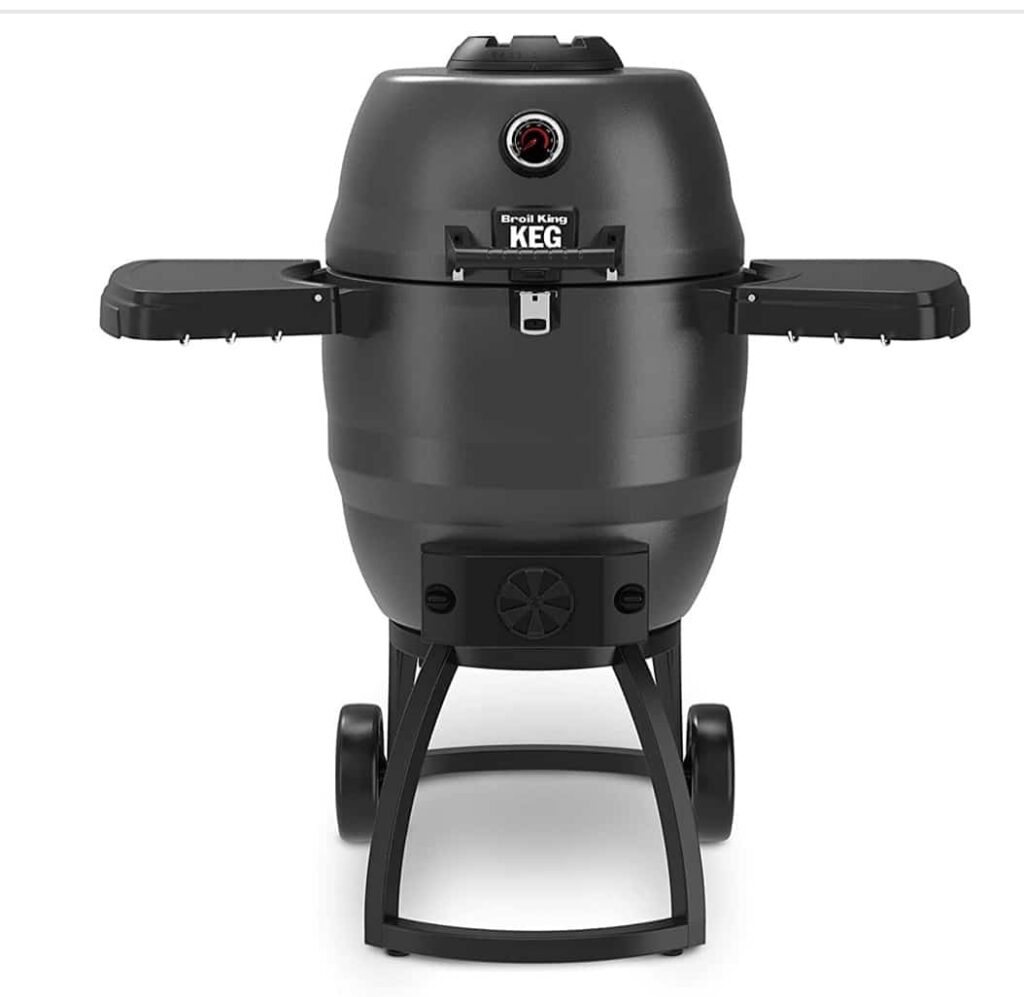 What Materials Do They Use?

Ceramic or other earthen materials are used for most Kamado grills to create a perfectly insulated environment. These two grills from Broil King use a lighter steel material.

One of the problems with using steel for Kamado grills is that steel cannot maintain the heat inside the grill. That is why Broil King made a special construction for each Keg Grill.

For the BK Keg 4000, the company used a double-walled steel construction. This allows the grill to hold the temperature steady inside while also blocking outer elements against the grill.

The space between the double-walled construction also fills up with air which helps reduce the amount of heat that is transferred out of the grill, keeping the exterior cool and safe to touch.

As for the BK Keg 5000, it uses a double-walled construction with a layer of steel that is also layered with other materials to insulate the grill properly.

The Keg 5000 uses modern fiberglass insulation which is coated all over the grill. It blocks the heat from going outside and the outside temperature from affecting the grill’s internal temperature.

The fiberglass insulation also helps in reducing fuel consumption as it perfectly maintains the temperature of the grill. It is then topped or covered with powder-coated stainless steel.

This combination of materials allows the Keg 5000 to get up to any temperature and maintain that temperature while also keeping the exterior of the grill cool to touch for safety purposes.

Both of these grills have an included rolling stand made with sturdy stainless steel with wheels that you can use to transport the grills on the patio, lawn, or deck. 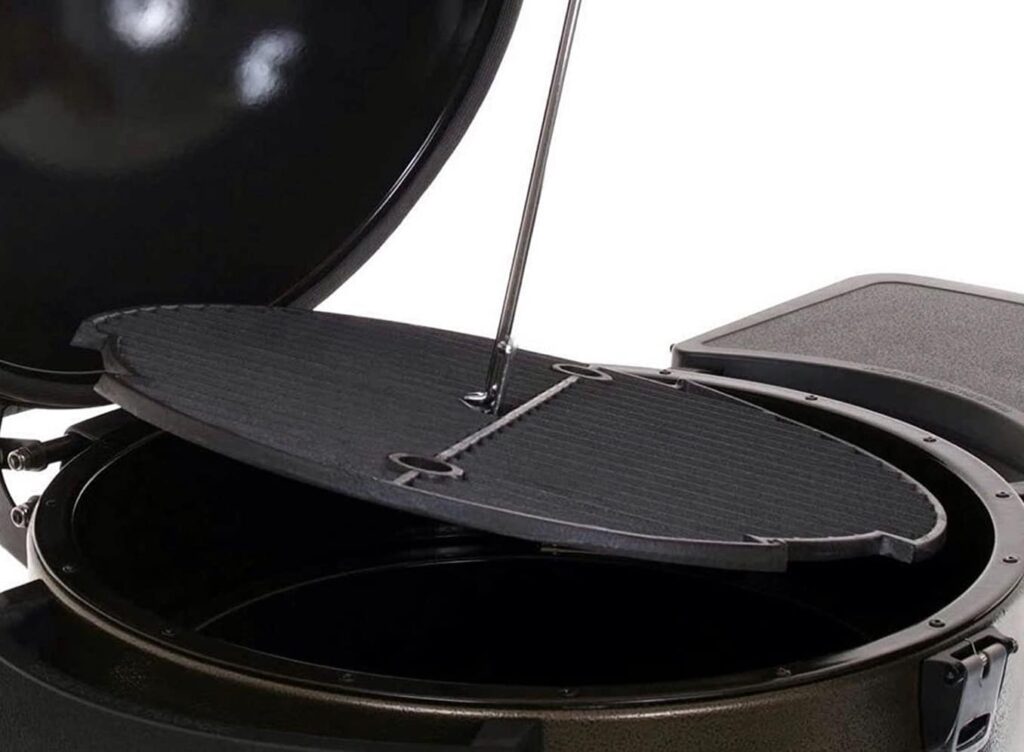 How Much Can They Cook?

One of the most important things that you should know about Kamado grills is the amount of food they can cook. You should always see which one can cook more or which is smaller.

The size of the Kamado grill should largely depend on your lifestyle. If you are a host for frequent parties, then it is best to go with larger grills that help you cook more food quickly.

If you just want something that can cook meals for the family or a small group of friends, you can get smaller grills. Either way, the cooking area of the grill should be considered first.

There is also the secondary cooking area with 200 square inches of cooking space that is meant usually for cooking more subtle types of recipes such as soup or reheating food.

The Keg 5000 has a total cooking area of 480 square inches as well. It has two separate cooking areas just like the Keg 4000 with a chrome-plated secondary cooking area.

These two grills can both cook multiple dishes at once. If you have a small party of around 10 guests, then these grills are perfect for that occasion as they can cook up to 15 burgers at once. 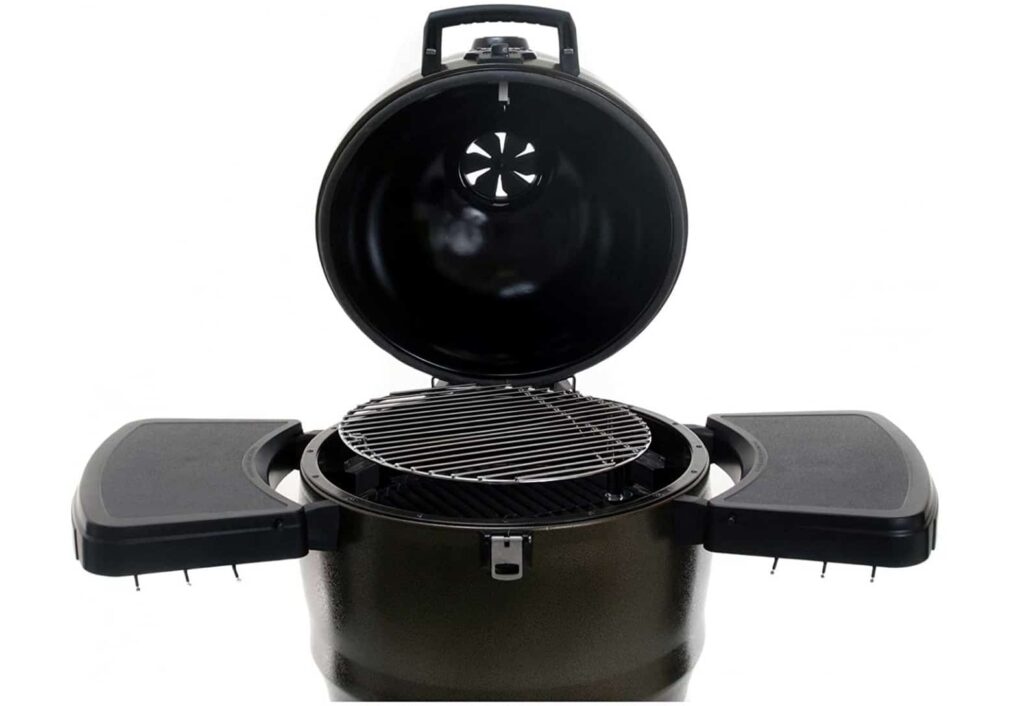 How To Control The Temperature?

These two grills have the same ventilation system in a general sense, but they do have small differences in how you control the temperature inside the grills.

There are two main bents on these grills. First is the damper at the bottom of the firebox where you can either open it fully to heat up the grill to its maximum temperature or close for lower ones.

The upper damper receives and deals with higher temperatures so it needs something more durable. That is why it is made out of cast-iron to keep it safe from deterioration from the heat.

The Keg 5000 has the same concept for this and the material used for the lower damper is aluminum while the upper damper is cast-iron as well for the same purpose.

To keep your hands safe from burning from the hot dampers, they have grooves that you can use to easily insert a spatula or other tools to easily turn the dampers.

How Do You Fire Them Up?

These grills heat up easily and starting the fire is easy as well. These Kamado grills work best with lump charcoal and they also do not spend too much even when cooking for hours.

To light them up, you only need a firestarter after filling up the firebox with charcoal. There, you can open up the dampers fully to make the fire heat up faster and easier.

When you are at the early stage of firing up the grills’ firebox, it is best to leave both dampers fully open so the fire gets enough circulation of air to gather the power that you need.

You can also leave the lid open for the same purpose. After the charcoals have lit up, you can then close the lid and slightly lower the air circulation by closing the dampers but not fully.

What Can They Cook?

After firing up the firebox, you can easily control the temperature and set it to the proper heat using the dampers. It allows you to get to the temperature needed for your recipes.

Because of their structure, you can cook almost anything with these grills. You can sear meat on the cast-iron grill grates or put other cookware over the grill for cooking other recipes.

The closed environment and control on the temperature also allow you to smoke meat in them. You can enhance the smoke from the firebox by putting chunks of wood on top of the charcoals.

You can also divide the firebox and cook two different recipes at the same time. Like most Kamado grills, these models can produce 2 different cooking zones inside.

By dividing the firebox and putting the charcoal on one side, you will be able to sear meat on that side while also allowing the heat to roll over the other side to cook at a lower temperature.

These grills are perfect for slow and low cooking since they do not spend too much charcoal. They have great insulation and a lot of power to keep the fire going inside them.

Compared to typical Kamado grills, the Kegs from Broil King spend 2 times less charcoal than other models. That means that with one load of charcoal, you can cook for hours with them.

Aside from the main grill, you can also get other accessories with these Kamado grills. You have the stand with big wheels that you can use to move the grills around the lawn or patio.

There are also shelves included with the grills. These help keep the cooking process and preparation near you since you can use them as a small table for preparing food.

If you do not want the shelves getting in the way, then you can remove them. You can easily snap them back on and use them to place your cooking tools near you when grilling.

How To Take Care Of Them

Thanks to the combined damper and ash-catcher, you can clean the Kamado grills easily. You do not have to regularly clean the ashes out by reaching into the firebox when done cooking.

You can remove them all at once by sliding the ash-catcher out and disposing of the ashes easily. The grill grates of these grills are made with durable materials so you can wash them with water.

Just be careful not to drop the cast-iron grates to prevent denting them or breaking. Since the grills’ exterior is smooth steel, you can easily wipe them down to clean them.

Just remember to always clean the grills after using them to be ready for the next cookout. You can also purchase a separate cover to protect the grills from the weather outside.

There are not too many differences between the Keg 4000 and Keg 5000 from Broil King. however, the Keg 5000 has a few advantages because of its better build and construction.

I would choose the Keg 5000 over the Keg 4000 simply because it has better insulation which means that it does not use up too much fuel which also translates to less cost in the long run.

However, the Keg 4000 is also great in cooking any recipe so for a more temporary choice, I would go with the Keg 4000. It is up to you which one you think fits your lifestyle best.

Nonetheless, these Kamado grills are great for cooking outdoors and making any type of food!

Spread the love
Previous Post: « What is Seasoned Meat Tenderizer- Does It Work?
Next Post: What Is A Chuck Eye Steak »