Bacon is usually fried on a pan under high temperature. However, if you want to know how to make bacon jerky in a Traeger grill, you should take these steps to get a perfect finish.

Bacon is one of the most popular foods for breakfast. It contains a lot of protein and healthy fats that will help you gain weight as well as muscle mass when you are exercising.

Jerky, on the other hand, generally refers to a lean cut of meat that was dried. Bacon jerky is obviously the combination of the two and it adds more texture and flavor to the meat.

Drying bacon helps to preserve the meat. You do not need to freeze it in order for it to last long as you can just leave it under the sun to dry out and it will last longer than most processed meat.

It is also commonly seasoned with salt before the total dehydration. This prevents the build-up of bacteria and molds in the meat which might make it less appetizing. 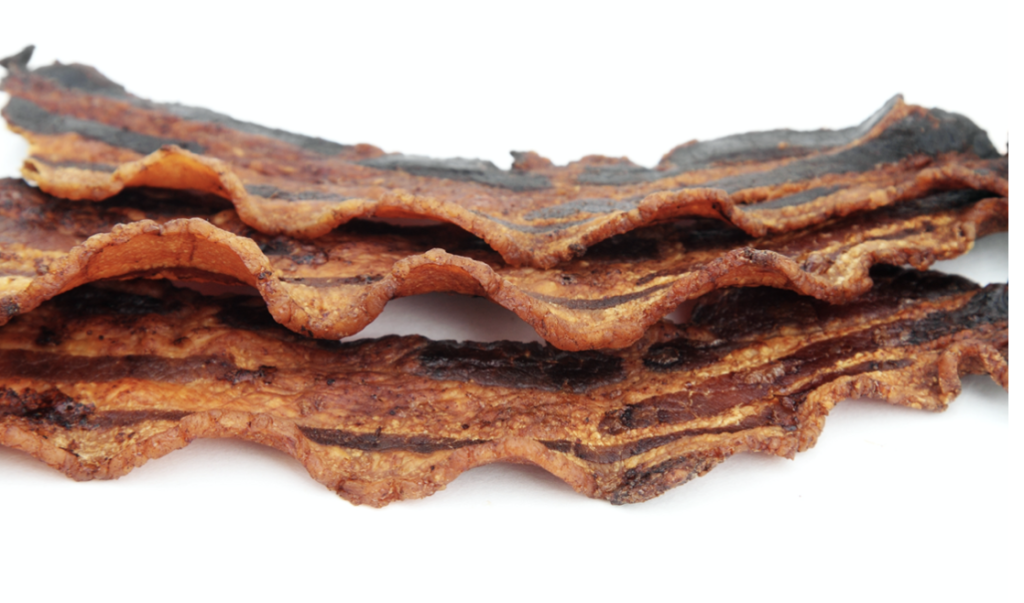 Cooking it might not seem different to fresh bacon but it does when you use a Traeger grill. These are powerful grills that can be controlled via your smartphone or tablet.

This means that you can hang around while the bacon jerky is cooking. They are powered by wood pellets as fuel so you add more flavor to the meat aside from the one it got from drying.

There are a lot of possibilities that you can do with a bacon jerky. You get the freedom to add any flavor that you want and they are a perfect combination for vegetables or eggs.

So if you want to make bacon jerky for dinner, start off your Traeger grill and then follow these simple steps so you can enjoy a nice, smoky bacon jerky for your next meal.

Bacon Jerky in a Traeger Grill

– Dry Rub of your choice

Fire up the Traeger grill by loading the pellet hopper with the pellet of your choice. We recommend apple or maple pellets since they combine very well with pork.

In order to do this, set the Traeger grill near a socket or get an extension cord so you do not have to set up the grill near areas where there are flammable objects.

If the Traeger model that you have does not reach this low, you can go for the lowest temperature. Traeger grills usually have a minimum temperature of 225 degrees Fahrenheit.

Since Trager grills are also considered as smokers, there is no need for you to set up the pellets on one side. There is also a heat deflector on the grill that will help in the process.

Get a baking rack and then lay the bacon slices on it. Make sure to leave at least a quarter of an inch of space on each bacon slice to let the air and smoke pass through them.

Put parchment paper or a cookie sheet underneath it to catch grease. This is a necessary step for making bacon jerkies especially if you are using a regular grill. 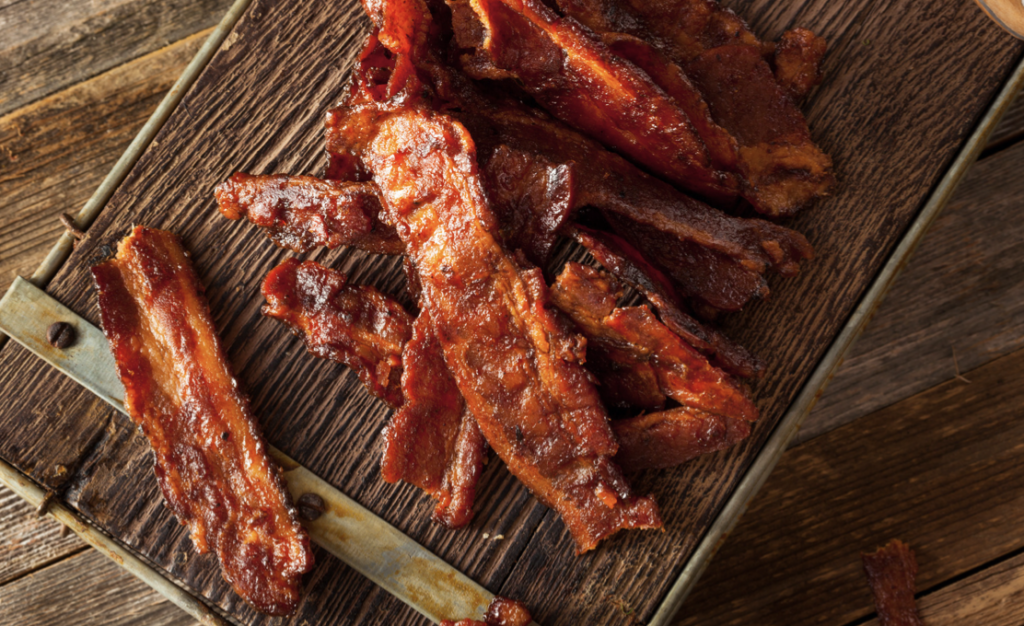 Prepare the dry rub of your choice and apply it to both sides of each bacon slice. If you do not have a ready-made rub, a mix of salt and pepper will be great for this recipe as well.

You do not need to go all the way with the seasoning. Just a light brush or a thin layer of the seasoning will do, you need just enough rub to coat the bacon slices.

Place the baking rack and parchment paper on the grill. You do not need to find the area of the grill where there is not much heat as the Traeger grill takes care of this.

Let the Traeger grill do its thing and you can sit back while waiting for your bacon jerky to finish. The bacon needs to be cooked in the grill for at least two hours to dry it out.

Every 30 minutes, make sure to check the parchment paper or cookie sheet. Remove any excess grease from them if you think that it will spill over the heat deflector.

Preventing the grease from dripping into the heat deflector will ensure a consistent heat. You also need to keep track of the temperature and make sure that it stays at 200 degrees Fahrenheit.

This will not be a hard thing to do as you have the Traeger app to guide you. All you need to do is to check on your phone whether the grill still produces the right temperature.

After two hours, you will notice that the slow cooking process would have slightly reduced the bacon slices and most of the fats have been drained out.

While it looks yummy already, the process is still halfway through. So, remove the bacon jerky from the grill and then drain the grease before putting them in a food dehydrator.

Preheating the dehydrator should take less than an hour so preheat it before the bacon slices are finished in the Traeger grill. You can also use an oven for this process.

Let the bacon slices cook for another 2 hours. Check on them every now and then to see if they have attained the texture that you want, you can go for 3 hours if the bacon is still softer than your preference.

The food dehydrator will do a faster job so we recommend using that if you have one. Get a plate ready with a paper towel on top of it to rest the bacon jerkies on. 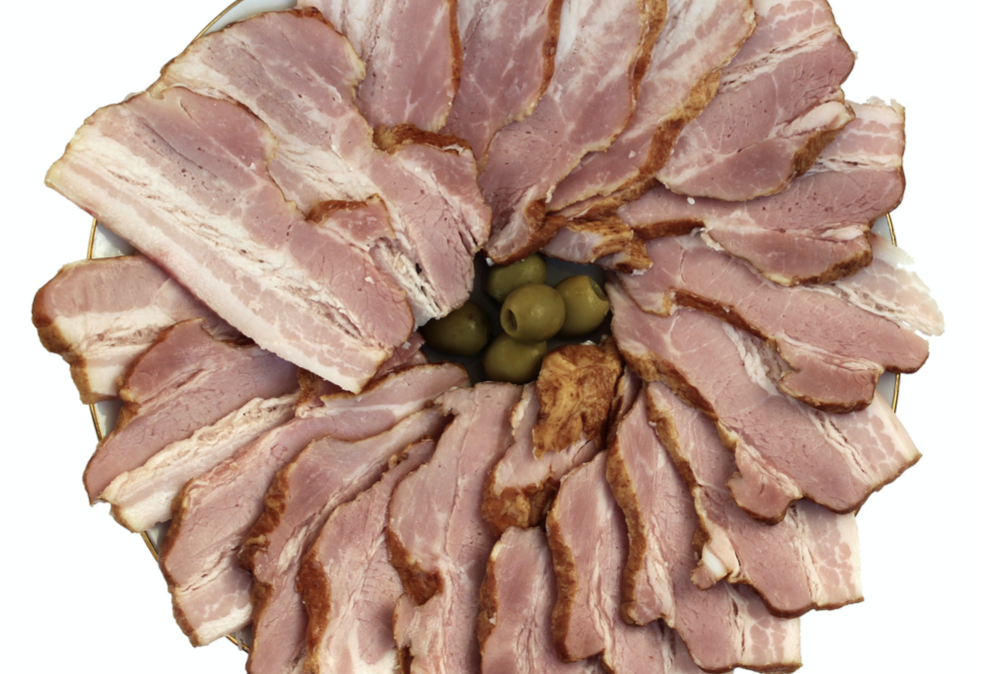 After the bacon jerkies have attained the texture that you want, remove them from the dehydrator or oven and then place them on the plate.

Let them cool completely and then pat the excess grease off of the bacon jerkies. You can then serve them right away or store them for future use.

As you can see, making bacon jerkies takes a long time. So instead of making small batches every time you want them, it is better to make a bunch of them to save time for later.

Since they can be stored for a longer time than fresh bacon slices, bacon jerkies can be cooked by large batches so you do not have to waste at least half of your day to make them.

Storing bacon jerky is also simple. All you need to do is to make sure that you have wiped or patted them dry, remove all the excess grease from the meat.

You can also put them in a zip lock bag. It is best that you let them cool down completely before storing the bacon jerky so that they will not create steam in the containers and make them too soggy.

If you also have a vacuum sealer, that will be a plus. Put the bacon jerkies in a zip lock bag and then remove all the air for longer storage.

Making bacon jerkies in a Traeger grill is one of the most fun things to do. First, you have these amazing cuts of meat and then you also have a powerful grill that needs little attention.

Bacon jerkies contain a lot of nutrients. They are good for breakfasts when you do not have much time to prepare a proper meal as they can be stored for weeks.

As we have mentioned, it is best to cook bacon jerkies by large batches so you can store them for later. This is a great meal and the kids will enjoy it very much.

Traeger helps in adding some flavors to the meat as it uses pellets for fuel. The smoke that the pellets produce seep into the meat to add more taste and texture to it.

So if you want an easy recipe to make for breakfast, get your Traeger grill ready and some slices of bacon and start making the best bacon jerkies!