There are many types of steaks that are beloved by everyone. The T-bone Steak and the Porterhouse Steak are two examples and people are often confused by which is which.

We do not blame you if you also confuse T-bone with Porterhouse. In appearance, these two cuts of meat are the same, but from there, the differences are a lot more than you think.

It is hard to imagine a barbecue weekend without at least one steak on the grill. It is a very nice way to fill your tummy and steaks also pack a lot of nutrients such as protein and healthy fats. 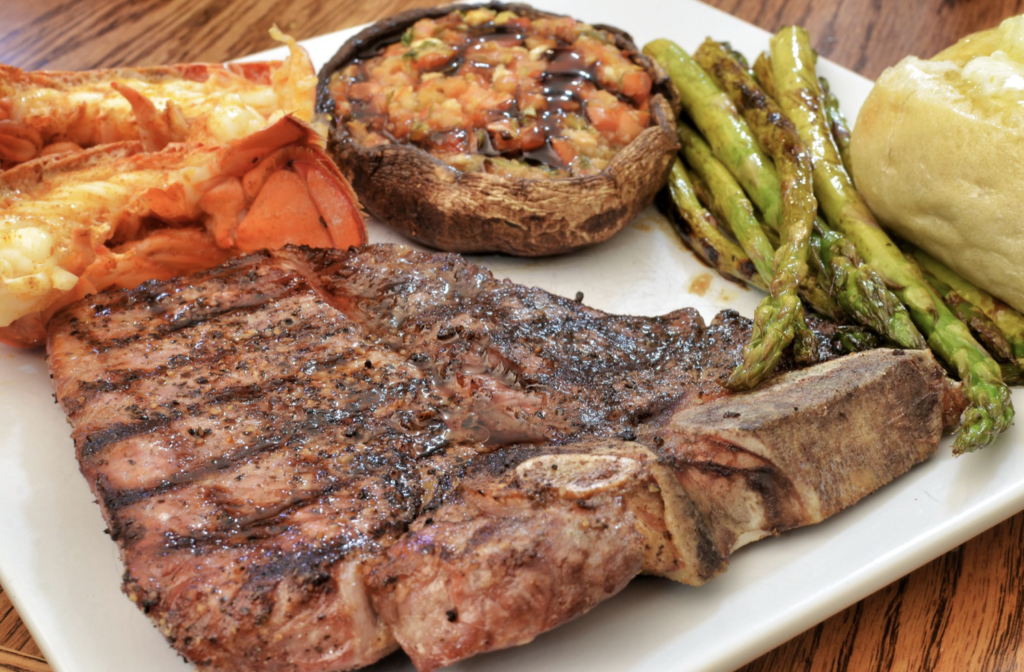 From there, you can see the obvious differences between these two steaks. The T-bone is a smaller cut of meat while the Porterhouse is usually bigger and contains more tenderloin.

Choosing which steak to put in the grill depends on personal taste and preference. So whether you choose the T-bone or the Porterhouse, you should consider how you like your steak.

The parts of the cattle where you get these cuts of meat are also similar. They are close to one another but when it comes to the content of the meat, they have an obvious difference.

Now, you might find some articles on the internet that try to differentiate these two but most of them are redundant. So here, we made it simpler and more detailed.

This article will give you a better understanding of how the T-bone and the Porterhouse steaks differentiate with a concise and detailed explanation. So let us begin!

To put it simply, you can make a cut of T-bone from a Porterhouse Steak. Well, not when the T-bone is already cut but they come from the same part so it depends on which is made first.

That is what these two steaks differe from as you can get a T-bone steak from the porterhouse cut.

This thickness is measured from the bone to the widest part of the fillet. The thickness of the meat should be consistently equal or more than 1.25 inches to thick to be a Porterhouse.

You can also consider the size of these two steaks when you order one from a restaurant. They often offer the average 24 ounces for a Porterhouse Steak which is considered as a meal for two.

Once a T-bone, always a T-bone

See, we just mentioned that a Porterhouse can be a T-bone. It can be cut into a smaller size and it is then considered as a T-bone because it is not as thick as the recommended size.

So if you cut a T-bone from the short loin, you cannot make it a Porterhouse. As long as the cut is less than 1.25 inches, it is considered as a T-bone steak.

However, you cannot go very thin with a T-bone. You are not allowed to sell a cut of meat as a T-bone when it does not reach a thickness of 0.25 inches.

So as far as the thickness of the steaks, they differ by an inch. If a cut of meat is less than a quarter of an inch thick, it can be sold as a bone-in New York  Strip but not as a T-bone steak. 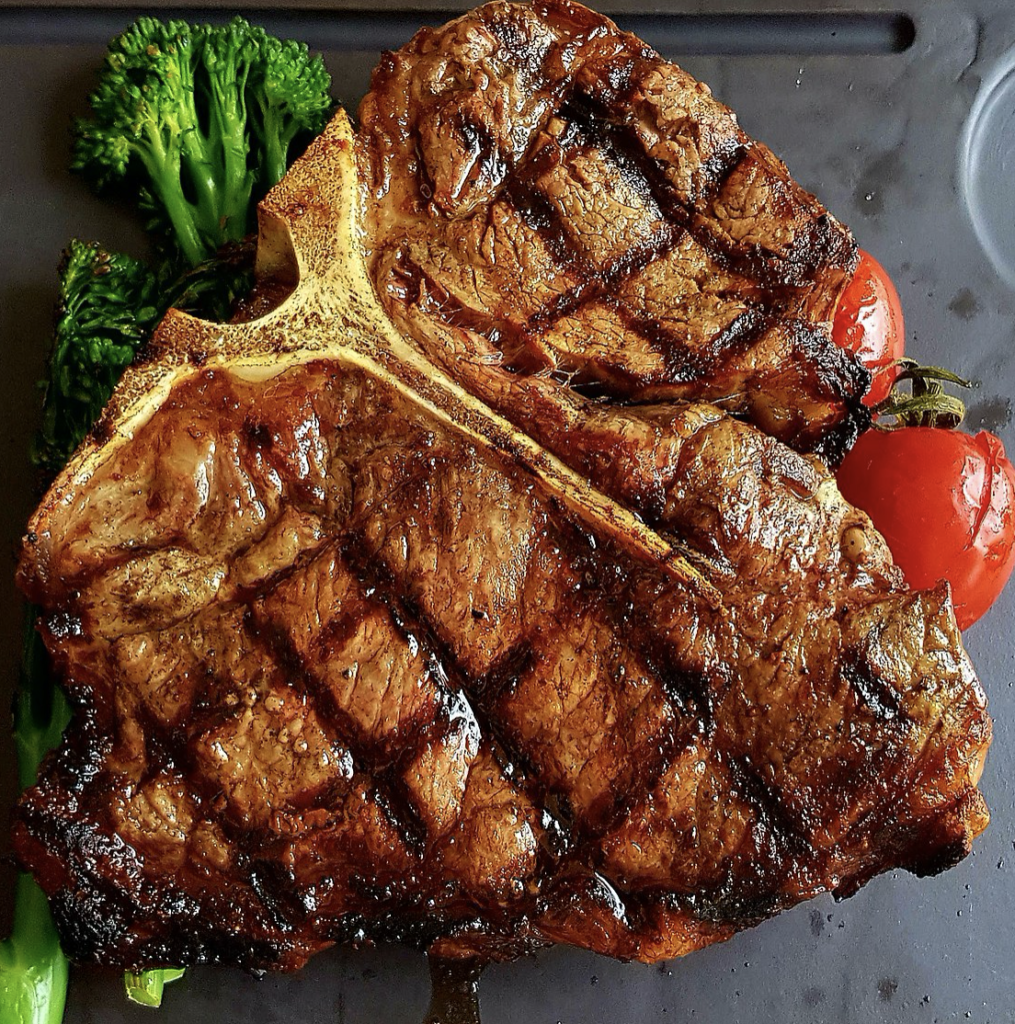 Both of these steaks are cut from the same area, the short loin. However, they have different components because of the part where you should get them where you can see what’s better.

The T-bone Steak comes from the saddle which contains less tenderloin than the Porterhouse. It derives its name from the T-shaped lumbar bone that holds the meat of the steak.

The Porterhouse Steak is cut from the short loin and a little bit from the top loin, also known as the New York Strip. You will see the difference between the cuts of meat on each side of the bone.

Now, we all know about how delicious the Porterhouse Steak is. But the real question is, do you get proper nutrition from this massive cut of meat or is it all about the size?

The answer is a definite no, it is not only about the size. A single pound of Porterhouse Steak contains enough protein for at least half of the daily requirement of our bodies plus more nutrients.

It contains a lot of zinc and iron which help the body grow tissues and improve the overall immune system. They are also responsible for keeping us mobile and resistant to infections.

However, a single pound of Porterhouse Steak also contains at least 1,000 calories. So if you are trying to get slim or reduce weight, then it is better to eat this steak for the protein.

Since the Porterhouse Steak contains a lot of nutrients and a lot of calories, the nutrients that you want in your body from the steak will ultimately depend on how much you consume.

For the T-bone steak, it contains a lot fewer calories than the Porterhouse. A cut of T-bone will usually contain between 180 and 200 calories so it is still a healthy cut of meat.

Now, the fat content of the T-bone depends on the marbling and the trimming process. So around 14 grams of fats come with the steak but you can go lower than that by trimming it off.

It also contains a lot of vitamin B12 that an average 12-ounce steak contains a third of the daily vitamin B12 requirement of our bodies. It also has zinc and iron like the Porterhouse Steak.

The average T-bone can also deliver at least 23 grams of protein. So if you are into keeping your body in shape, this is a good source of nutrients to fix and develop the muscles of the body.

You can clearly see what’s better by looking at the difference between the two in terms of the nutritional value. Cuts like filet mignon, ribs, top sirloin, or bottom sirloin, are also healthy choices. 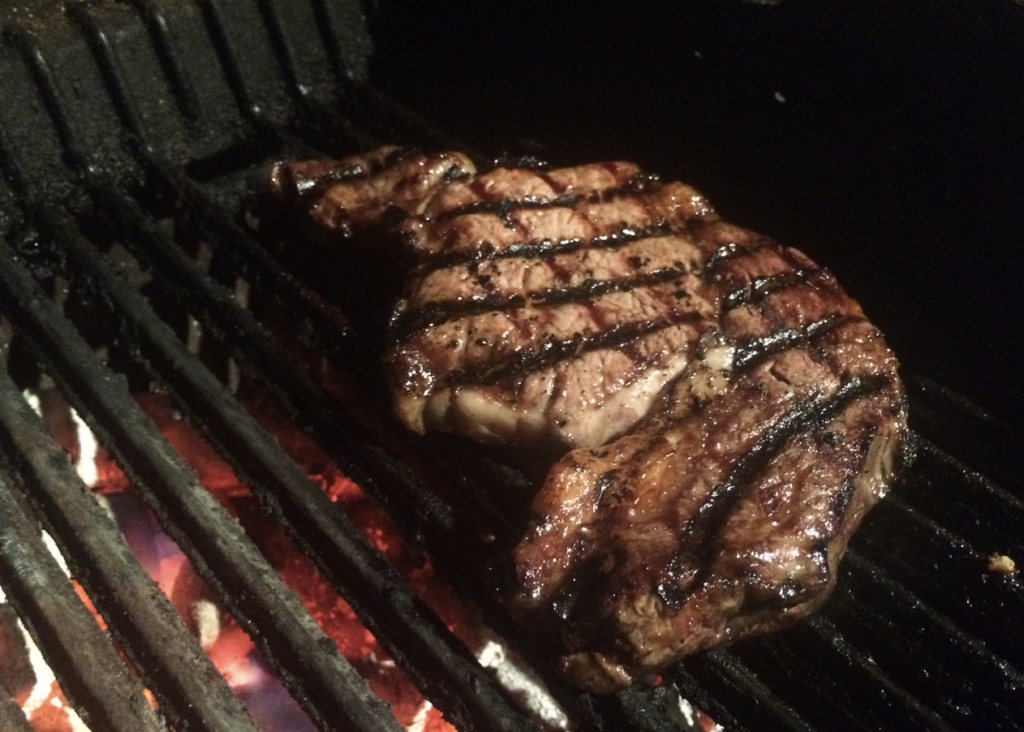 The most expensive cuts of meat for mass production are the ones marked with the USDA Prime. This is because they are inspected properly to make sure that they are safe and of the highest quality.

This goes with any cut of meat so whether you buy tomahawk, ribeye,filet, mignon, sirloin, brisket, New York Strip, Porterhouse, or T-bone, you need to find the meat that is marked by the USDA to get the best one.

In terms of price, Porterhouse Steak is far more expensive than the T-bone,tomahawk, filet mignon, and Ribeye. This is because Porterhouse contains more fillets and tenderloin which means you buy the weight of the meat.

There are hacks that are applied with the T-bone where some might get more bone than meat. See, the weight of the bone is still considered in pricing so you need to take a look at that.

Another thing that some producers do is to display a thicker part of the Porterhouse while it slopes thinner on the other side to fool you. Picking one out is always important so you do not get scammed.

So in general, the price of the meat like Tomahawk, Ribeye, Porterhouse, and T-bone will depend on the quality, weight, aging, and the source of the meat.

You will find cheaper cuts of meat from supermarkets than in butcher shops.

Since the T-bone and the Porterhouse Steak come from the same part of the cattle, they will cook the same. The texture is not that different from each other so they require the same cooking process.

The observable difference in cooking these steaks will be the duration. You will need to cook the thicker Porterhouse longer than the T-bone to get the perfect temperature and finish on the meat. 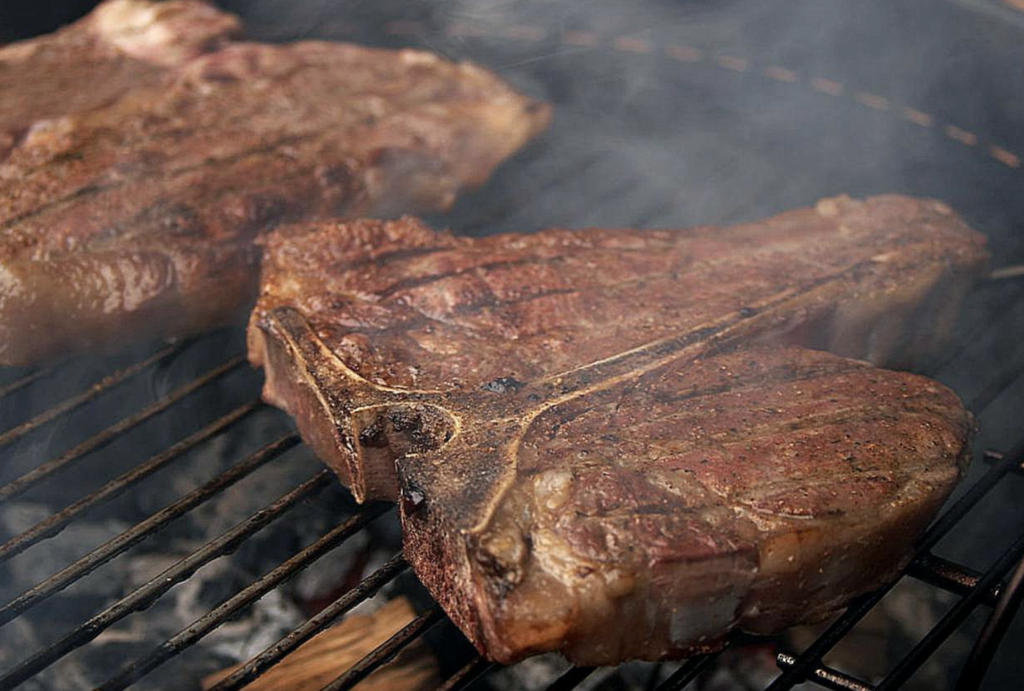 Cooking these steaks will be the same. We figured that it is best to cook the Porterhouse Steak and the T-bone on a cast-iron pan to get the perfect sear and moisture on the meat.

By letting the pan catch the melted fats from the steaks, you get to keep the moisture and so it tenderizes the meat. It also leaves a nice pink finish on the inside of the meat. 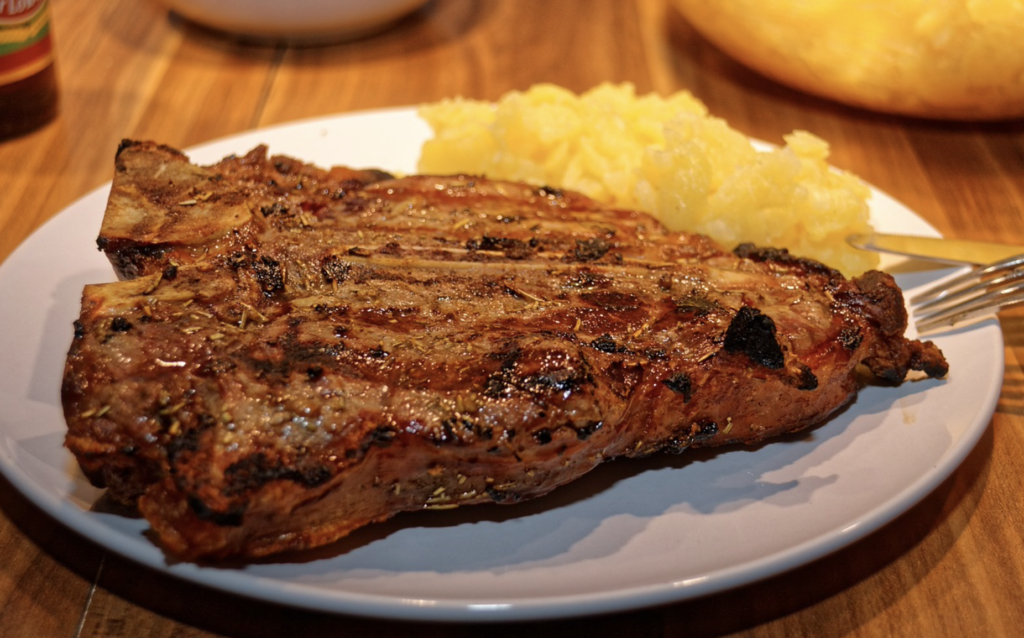 Seasoning the steaks with salt and pepper will be enough. You can then add herbs that you want to put in the steak like thymes, garlic, star anise, and more.

If you want to grill the steaks, then you can put the rub that you want and then let them sear on the grill. Put them on the cooler side of the grill after you sear them to continue cooking.

The T-bone tends to be more tender than the Porterhouse steak. The T-bone is what’s better if you want to make a really tender meal that does not need to be cooked too long.

Now that you know the difference between a Porterhouse Steak and a T-bone Steak, you can now follow some recipes that you prefer to cook the perfect steak for your meal.

The Porterhouse is a thicker piece of steak so you might want to cook it longer. Low-cooking is an essential part of grilling this steak so the heat penetrates to the center of the meat.

The T-bone also gets more tender if you sear it and then let it slow-cook on the side. It will taste better and softer when you do this because the fats get marbled decently.

You can get the best piece of meat by following some simple factors. As much as possible, you need to buy the meat that is certified by the food authorities in your locality.

The difference between the Porterhouse Steak and the T-bone Steak will be easier to determine now that you have read the guide above. So take a close look at the cuts of meat and see which one is a Porterhouse and which is a T-bone.

Spread the love
2
2
Shares
2
Shares
2
Previous Post: « 5 Recipes on How to Use Leftover BBQ Chicken
Next Post: Z Grills Vs Traeger »