Cooking food at home is such a fun activity. You can make the best foods you want with the flavors and ingredients you love the most in the Broil King Keg 2000 or Broil King Keg 5000.

Grills are great in cooking almost any food that you like. They are one of the most versatile cooking appliances because of their design and the heat they produce.

Not all grills are the same; there are different kinds of grills you can choose from; one is the Kamado grill, a unique Grill and cooking type.

Kamado is also a cooking style that originated from China thousands of years ago. They first used clay in making these types of grills, and now, we have a lot of materials to choose 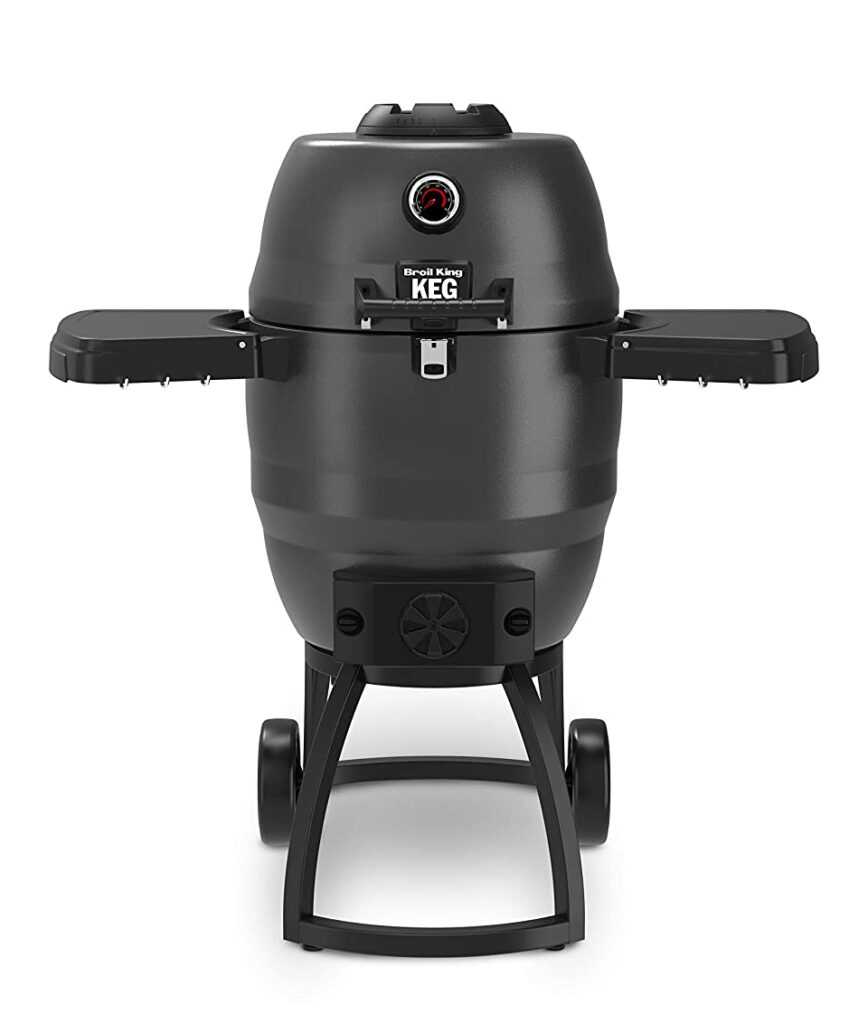 You might be familiar with the Big Green Egg or the Kamado Joe. They are great, but they also have a worthy competitor on the side, Broil King, a company with innovative grills.

The Keg series of the company is one of the unique types of Kamado grills since they do not necessarily follow the traditional build. However, they still perform well when it comes to cooking.

So let us see what the two can do and compare them to let you know which one you should choose. Make sure to take note of the notable differences between the grills.

What are the Basic Building Blocks of the Grills?

One of the first things that you should consider when buying a grill is the company’s material in making them. It is especially true with Kamado grills for the insulation.

Kamado grills are known for their fantastic insulation, meaning that they can retain heat well. That is mostly because of the materials they use to build them, such as clay and ceramic.

However, with the Broil King Keg grills, they are not made with any of the two or any earthly materials. Instead, it is made with stainless steel, insulated in the process.

Clay or ceramics are perfect for insulation as they can maintain and retain the heat inside them. However, the stainless steel of the Keg grills are durable and are also good at insulating. 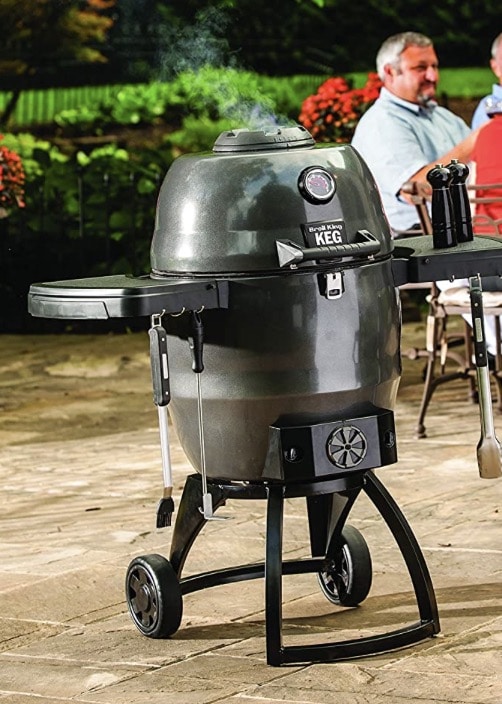 That is made possible by the double-walled insulation of the grills. That way, the heat will have a pocket of air between the walls to pass through before it can go out of the Grill’s interior.

Broil King also justified using stainless steel instead of ceramics by saying that it will prevent cracks. That is true as it is one of the most common issues with ceramic appliances.

Ceramics often crack when exposed to cold marinades from the food you are cooking or transport them; the stainless steel build eliminates it.

How easy is it to set up both the grills?

The Broil King Keg grills are fully-assembled when delivered. If not, you will have the guide included in the product, and despite the complicated parts, it is pretty easy to assemble.

Now, to use the grills properly, you need to set them up outdoors only. Never put them indoors, or else they will be creating more problems such as fire than benefits to your cooking.

The 5000 Keg comes with its stand with two huge wheels on the back. These wheels are good for transporting the Grill, so you do not physically carry the heavy parts around.

With the trailer hitch adapter, you can also bring these grills on tailgating grills. However, this is an accessory, and you need to buy it separately from the main grills as it does not come with it.

Significant Differences between the Broil King Keg 2000 Vs. 5000

The first significant difference that you will see between the Keg 2000 and the Keg 5000 is, of course, their sizes. They have different areas for cooking as well, so you can choose.

The Keg 2000 has a total of 280 square inches of cooking space. This kind of space is enough for cooking at least two steaks simultaneously or burgers if you are having a small party.

While that is enough for a small group of people, the Keg 5000 has a larger cooking space. It offers a total of 480 square inches of cooking space because of its large interior space.

The Grill comes with other accessories that allow you to expand the cooking area. With this, you will cook for a massive group of people in no time for parties.

The main cooking grate of the Keg 5000 is the same as the Keg 2000. It only has a total of 280 square inches. However, it comes with a secondary cooking space of 200 square inches.

Aside from that, the Keg 5000 also has two removable shelves placed on each side of the gill chamber. That way, you will have an excellent area to put your food on or even prepare them.

The Keg 2000 does not have this option. Instead, it has two handles on the side, used for carrying the GrillGrill. It can be a two-person job as the Grill weighs over 100 pounds.

Portability of the Grills

In terms of moving the grills from one place to another, the heavier and larger GrillGrill is more comfortable to transport. That is because of the wheels on the stand that included with it.

The stand is tall and durable enough to lift the entire weight of the Keg 5000 off the ground and move it quickly.
The Keg 2000 does not have wheels, so you have to carry it if you want to move it.

Despite having wheels, the Keg 500 is also great for tailgating trips as you can set it up on the back of your truck.
The same goes with the Keg 2000, and they both need the trailer hitch adapter.

The Keg 2000’s stand has that the Keg 5000 does not is the small rack underneath. It was helpful for me as I was able to dry some charcoal on this rack. 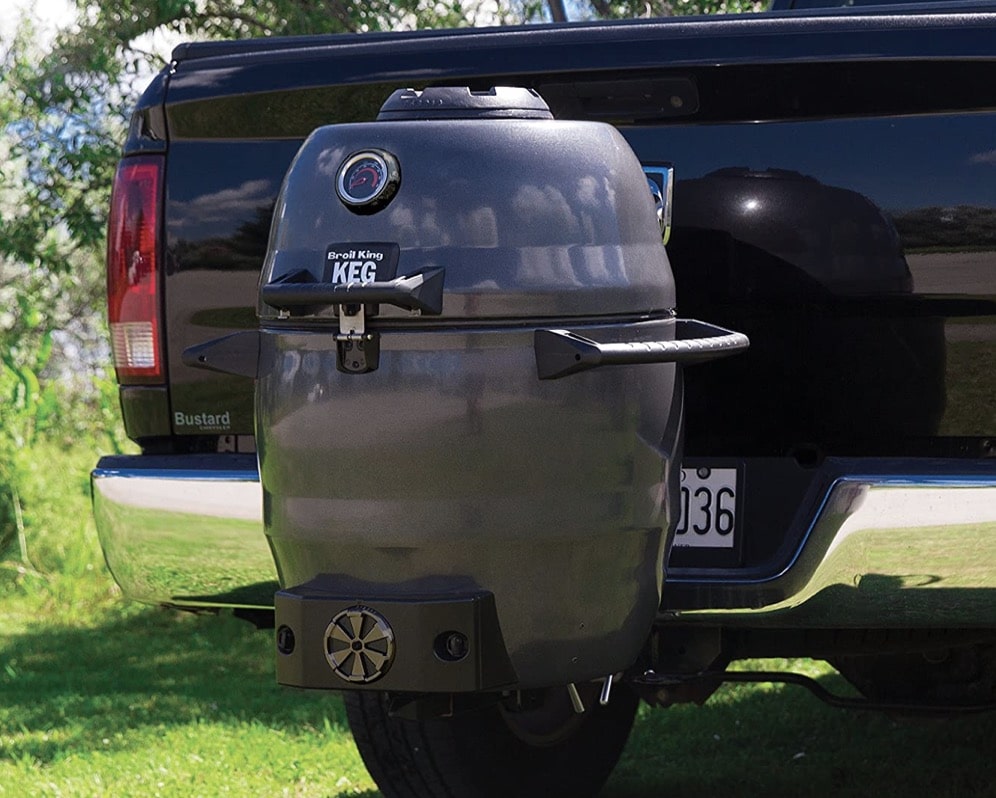 What are the Features of the grills?

When it comes to performance and other features, these two grills are pretty much the same. The only significant difference they had was the areas of cooking and the portability factor discussed above.

The bottom part of the grills has this wheel-like feature that turns to let air inside the GrillGrill. That controls the temperature at a higher increment when you are cooking.

From there, you will also see the top part of the lid with the vent. Both products have The multi-tool included, which you can use to turn the vents on the grills.

The lids have a vent made with cast iron, so it does get hot after a while; this is where you use the multi-tool, so even if the GrillGrill is piping hot, you can still control the temperature.

When I tried these dampers, I noticed how fast the temperature changed. The stainless steel was helpful when it came to raising the temperature but took more time in lowering it.

Aside from the grills’ double-wall, they also have another feature that helps keep the heat inside the grill chamber. That is the seal on the lid that goes around the space.

For some grills, the lid can be the main reason why the temperature is not going as high as you want it to be. That is because some of the smoke or heat is escaping through the lid.

Meaning, there is a small space between the lid and the Grill body, which, as time passes by, lowers the temperature even if you fire it up or even after you opened the vents fully.

This seal is perfect for the stainless steel build of these grills. Even if the lid is not that heavy, it presses down onto the body so that the air and the heat inside will not escape easily.

It is a small detail that gives you more control over the temperature inside the GrillGrill. You can then cook better if you have this type of power, and the food will come out the way you want it.

The Keg grills are made with the perfect interior to make sure that rust does not build up. The cooking chamber of these grills is porcelain-coated, which is very helpful in cleaning as well.

This coating has high-heat resistance, which means that it does not leave the steel exposed to both the fire inside the chamber and the food’s moisture.

The company made the Grill with High-quality materials, especially the parts exposed to sunlight and rain. That goes with both of these grills as they are for outdoor use or outdoor cooking.

The dampers on the lid and the bottom consists of cast iron as the raw material. That means that they do not rust so easily despite having them exposed to constant heat and moisture from the food.

The same material is used on these grills’ grates as they get continuously exposed to heat and moisture; this also allows you to put fatty foods on the Grill without them bending.

The insulation of these grills was excellent, and you cannot notice the difference between it and ceramic grills. The Grill is fuel-efficient.

Note that these grills use charcoal to only get up to a temperature of around 500 degrees Fahrenheit. However, that is enough to cook steaks and meat with excellent sear marks.

What surprised me the most was the grills’ ability to cook in the slow and low technique. I was able to create a smoker with these grills as they were able to maintain the heat.

If you want to do this, you only need to put a chunk of wood on the firebox to enhance the smoke. The ribs that I cooked were perfect, and they fell right off the bone once done.

The temperature control was easy and very efficient. The only difference that was noticeable for me was the amount of food that I can cook on the grills when the Keg 5000 dominated.

If done with your cooking session, you should always clean the grills. They have their ash-catchers, which made it easier to clean, but you need to get to the grills’ interior.

The comfortable and convenient thing about cleaning these grills was that they were made from safe materials to wash with water. I did not even need to use soap to get them cleaned.

Just as long as you clean them ever after use, there is not much maintenance involving these two grills. You can even leave them outside when not in use; I recommend getting a cover too.

When it comes to cooking foods for either small groups of people or a big party, grills are always helpful. Plus, you can enjoy the fresh air as you cook in your backyard under the sun.

The only difference in the Broil King Kreg 5000 and 2000 is the cooking space and the wheels at the bottom of the grill.

The Broil King Keg grills are the perfect companions for this. They are mighty and versatile, so you will not need to get other appliances out of the house for cooking.

Their exceptional temperature control is very beneficial. You can cook almost anything with the grills, and they always perform well no matter what the weather is outside.

So stop switching from one appliance to another when cooking and get you a grill to cook all the food you need. The Broil King Keg 2000 and Keg 5000 will be great for you.