There are many ways to cook your delicious food, especially if you have a great grill. Pork is a great kind of meat, and we have here a guide for you on how long to grill pork chops.

If you have a grill, there are many ways to cook your pork chops. However, you will need to be careful as pork chops can easily get burned or overcooked under direct heat or searing.

There are also many kinds of pork chops, and you can select the best one according to the occasion you are having. We also have a guide on each type of pork chops, so read on.

With their low price, pork chops are one of the best cuts of meat that you can get. Despite being relatively cheap, they are tasty and are full of healthy nutrients in each bite. 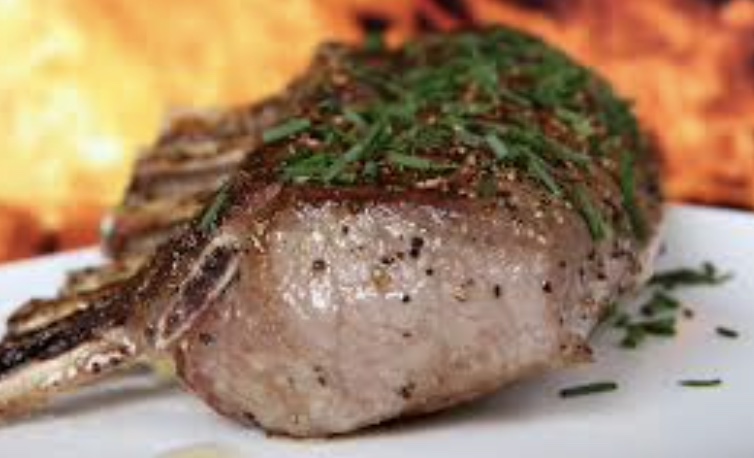 There are many ways to prepare the pork chop, which you can do to further enhance the flavor. They have a decent amount of fats, so they hardly dry out when cooked.

However, there are some instances where you can still dry them out if you did not time the cooking process well. So here, we will figure out how long it takes to cook them properly.

How Long Should You Grill Bone-in Pork Chops?

Bone-in pork chops are my favorite out of the many types of pork chops. They are full of flavor, and they do not get easily dried out, or they do not harden fast because of the bone itself.

When you cook bone-in pork chops, you just need to be careful not to waste the flavor. They reduce faster than other meat cuts, so you need to time it perfectly according to the size.

There are also some techniques that you can use to create a juicier result. You can use either marinade, but there is no need to put too much that will overpower the pork’s flavor.

Once you have settled with your marinade, you can cook a thin bone-in pork chop for about 3-5 minutes with the grill closed. You will need to turn the pork chops once during the process.

That is for thin 1/4-inch pork chops, but you will need a longer cooking process if you have a thicker cut. 1-inch bone-in pork chops need to cook between 8 to 12 minutes.

Also, always remember to keep the grill closed during the cooking process. Keeping it closed will help you give the meat consistent heat and help prevent it from drying out.

Keep in mind as well that bone-in pork chops cook faster than the boneless counterparts. So always keep an eye on the grill to ensure that they do not get burned or overcooked.

How Long Should You Grill Boneless Pork Chops?

For 1/4-inch thick pork chops, cook them over direct heat for 6 to 7 minutes. While doing so, make sure to turn the pork chops at least once during the cooking process to cook both sides.

For boneless pork chops with a thickness of one inch, you need to cook them for 10 to 15 minutes while flipping them every 3 or 4 minutes on each side to cook it all the way through.

Perhaps the major difference between cooking bone-in and boneless pork chops is the time, but you need to know a few things to cook each type of pork chops.

For example, whether it is bone-in or boneless for both one-inch pork chops, you need to lower the temperature slightly to cook it in the middle without burning the edges and outer parts.

You will also need to let the pork chops rest for at least 5 to 7 minutes. This is part of the cooking process, especially if you have cooked the pork chops for more than 10 minutes.

It is also better to cut the pork chops right on the table when served than when you cut it beforehand. You need to get the heat inside, so serve it right after letting the chops rest.

One of the main factors you need to consider when you want to know how long to grill your pork chops is their thickness. The longevity of the cooking process depends on the thickness.

Besides that, you also need to make sure that the pork chops have reached the right internal temperature before serving them, as pork meat has different kinds of bacteria inside them.

So aside from the thickness, you need to make sure that the pork chops are on the grill long enough to kill the bacteria. However, you also need to control the timing to avoid burning the pork chops.

At medium heat, a 1-inch pork chop should cook for at least 8 minutes. There, you can make sure that the insides cook well, and the bacteria have died inside the pork chops.

Thicker 2-inch pork chops should cook on a grill with a temperature of at least 350 degrees Fahrenheit. At that temperature, you need to grill the pork chops for 12-15 minutes.

You also need to cook the thick pork chops with a little bit of a different technique. Instead of flipping the pork chops completely over, you just need to turn them at first to cook one side.

So you just turn the pork chops at a 90-degree angle after 3 minutes and let it continue to cook on the same side before flipping the pork chops over and doing the same turning process. 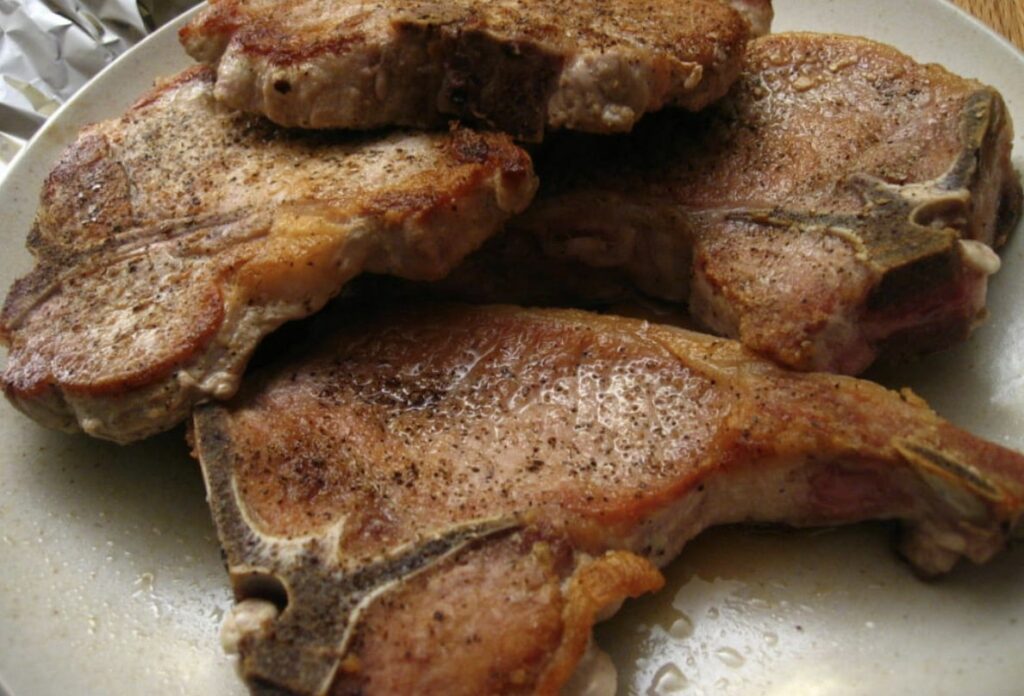 This will put beautiful grill marks on the pork chops, but aside from that, the grill’s heat will have penetrated evenly into the middle part of the pork chops.

The cooking process does not end on the grill, as letting the pork chops rest is also a part of it. This is especially true and necessary for thick pork chops to prevent them from drying out.

So after grilling them for 6 minutes on each side, let the pork chops rest for at least 5 minutes. This will help continue the cooking process, and the internal temperature will rise by 5 degrees.

How To Tell If The Pork Chops Are Cooked?

There are some practical ways to test whether the pork chop is done, but sometimes they are inaccurate, so the best way to test them is by using a meat probe.

The most important thing to know is whether the pork chops have attained the internal temperature that is safe to eat, which, according to the USDA, is 145 degrees Fahrenheit.

Using a meat probe is the most accurate way to know when you should remove the girl’s pork chops. All you need to do is insert the meat probe into the thickest part of the pork chop.

Once it reads 145 degrees Fahrenheit, you can remove it from the meat and then let the pork chops rest or cook them further if you want the doneness to go near the well-done side.

At 145 degrees Fahrenheit, the pork chops are at medium-rare doneness. So by removing them from the grill at 140 degrees, you can let them rest for 5 minutes to get to medium-rare.

There are many things to consider when cooking pork chops since you will be dealing with a very great meat cut. You need to time it perfectly and know when to remove them from the grill.

Thinner pork chops should cook under direct and high heat since they cook easily. Just be careful not to burn the outsides and prevent flare-ups from happening.

Thicker ones are easier to cook in lower temperatures since you need to slowly get the heat into the meat’s middle part. So be patient and go for a slower cooking process with thick chops.

Consider bone-in or boneless pork chops when cooking and make sure you get to cook them up to the safe internal temperature with the best juicy and tender result!

Spread the love
3
3
Shares
3
Shares
3
Previous Post: « How To Cook Steak On A Blackstone Griddle
Next Post: How Long To Grill Burgers »