If you want a delicious beefy meal that is not hard to cook, then you can follow the instructions below to know how to cook skirt steak on a cast-iron skillet and have the best and easy meal.

Skirt steak comes in two different cuts, one is the inside, and the other is the outside skirt; they both come from the upper body part of the cow and contain many muscles.

Compared to most cuts of beef, the skirt steak has less fat content in it. When cooked, it produces a very meaty flavor, but it can be tricky because of the many muscles.

That is why you need to know exactly how to cook it to get that beefy flavor and a soft texture. You can do that with the most basic appliances such as the stove and a skillet.

There are no complicated parts of the process when you cook skirt steak on a cast-iron skillet, to be fair. You just have to know the proper way to do it, so you do not waste the meat. 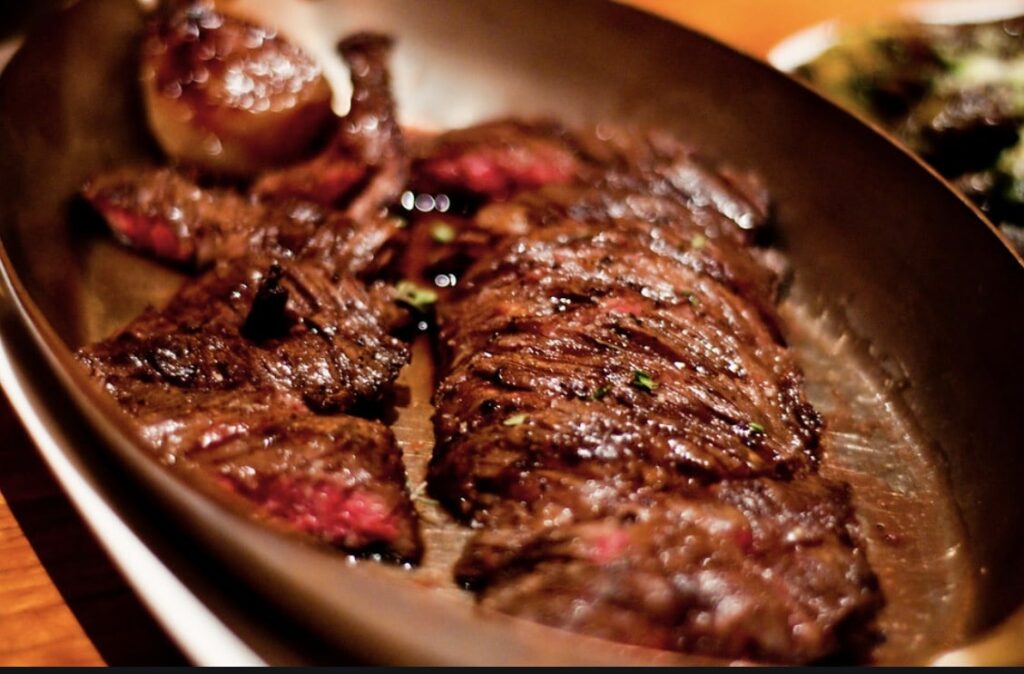 So while you are preparing your delicious meal, read on as we take on the proper way and tips on cooking the skirt steak on a cast-iron skillet to make the best out of this beautiful cut of meat.

There are not many tools that are needed when it comes to cooking the skirt steak. All of the tools are pretty much basic and found in a common kitchen in the drawers.

You will need some tissues to dry the meat for this recipe. However, this is just a guide, so you can go out of the way and make your recipe just by following the basics.

One thing I found best when cooking the skirt steak is to season it lightly. You will not need too many seasonings as it can overpower the meat’s taste since it is relatively thinner.

So just salt and pepper for the seasonings will be enough. You can also go with your favorite rub or add some herbs and spices to the meat, just don’t overdo it to get the best out of it.

You will also need about two tablespoons of olive oil to cook the skirt steak on. This is so the thin cut of meat does not stick on the cast-iron skillet when you cook it, and the skillet is still cold.

Aside from these, there is not much you can add to this recipe. I mean that the simple skirt steak can become a delicious meal just by these simple ingredients you add to it.

So get your cast-iron skillet ready and start cooking by following these simple steps below. Find the best side dish you want to go with, the skirt steak later after or even during the cooking.

Instead of just pouring the seasoning over the whole steak cut, I find it best to cut the steak first into smaller portions. Get the steak and make cuts of around 5 inches in length.

That would divide the common skirt steak into three pieces, depending on the skirt steak’s total length. This will already help in breaking down some of the tendons between the meat.

Slicing the skirt steak before cooking will also make it easier for you to slice the smaller portions after cooking. They are also easier to fit and adjust within the pan when it is cooking.

Get your paper towels and start patting down on the raw sliced skirt steaks. This removes the liquid from the steaks’ outer parts and helps the dry seasoning go further into the meat.

Drying the meat will also help brown the outer parts of the steak when cooked. Ensure that pat the skirt steaks dry on both sides before putting the seasoning right on top of the steaks.

Get your salt and pepper, and then season the steaks generously with them on both sides. If you are using powdered rubs, put just enough and not coat the steaks too much. 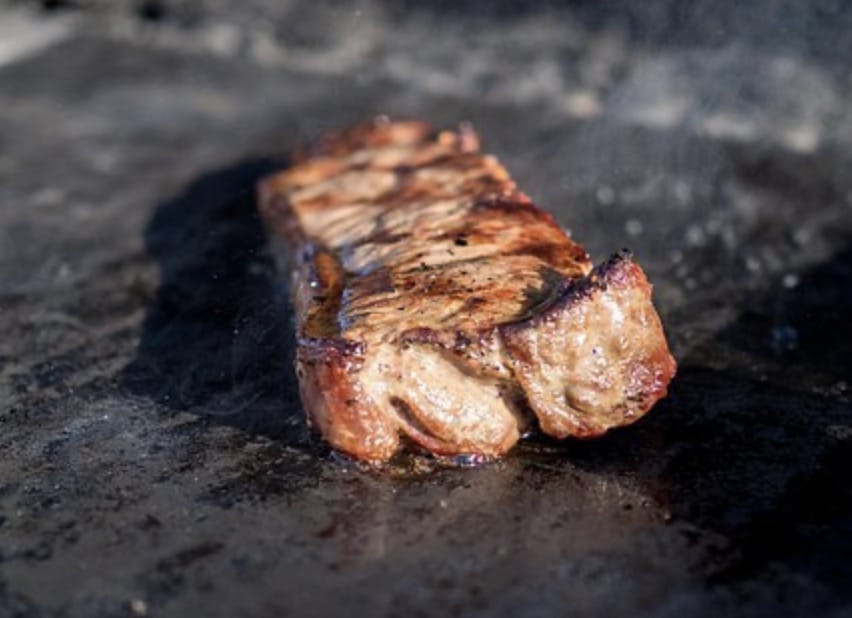 While you are letting the skirt steaks absorb the seasoning, leave them on the counter with a cover so flies or bacteria will not enter the meat. While doing so, prepare the cast-iron skillet.

Get the cast-iron skillet and then heat it on the stove over high heat for about 3-5 minutes. Hover your hand over the skillet to feel hot enough and leave it on if it is not hot yet.

Before it starts to smoke from the heat, pour the olive oil around the skillet and wait for a few seconds for the olive oil to heat up. Do not let the oil produce a burning smell.

Get the cover off of the steaks, and one by one, place them on the cast-iron skillet. Make sure to put a little bit of space between the steaks when laying them down to manage them easier.

The cast-iron skillet and the oil in it would most likely be too hot for you to use your hands in laying the steaks on, so you should use a tong and lay the steaks on the skillet, away from you.

Let one side cook for about 2 to 4 minutes, depending on the skirt steak’s thickness. You can lift the steak slightly with the tongs to see if the underside already has enough browning.

Flip the steak and cook the other side for another 2 to 4 minutes. If you want the steaks with medium-rare doneness, get your meat probe and aim for 130 degrees Fahrenheit.

After the skirt steaks have reached the internal temperature that fits the right doneness, take them out of the cast-iron skillet and then turn the stove off. Let the skirt steaks rest for a bit.

Put the skirt steak on a wooden board and let it rest for about 10 minutes. Loosely cover the skirt steaks with foil to keep the juices and help it continue cooking before serving.

After the skirt steaks cool down, get a knife and slice them with a 45-degree angle right across the grain. This will help keep the soft texture, and the meat will fall off easily off the bone.

Place it on a serving plate and drizzle it with your favorite sauce or just eat it as it is. The skirt steaks go great with salads or sandwiches. Make your side dish to improve your appetite.

Should You Marinade The Skirt Steak?

Although I find it best to just season the skirt steak with dry herbs and spices, it can be marinated. It is better to marinate the skirt steak if you cook it over direct fire.

So it depends on the cooking style that you want. So if you want to marinate the skirt steak while cooking it on a cast-iron skillet, I would not advise against it, but dry rubs and seasonings are better.

If, for example, you want to grill the skirt steak over direct flames, then it is best to marinate the skirt steak to keep it juicy. It depends on the cooking style that you choose to follow.

Skirt steaks are a delicious cut of meat that contains a lot of protein and a meaty flavor. They are thin, so you do not cook them like cooking your large steaks and other cuts.

So if you want to learn how to cook a skirt steak properly, you should follow the instructions above. From there, you can customize the recipe and make your style of cooking.

Cooking the skirt steak on a cast-iron skillet will also help you give the meat a more even finish. Avoid using thin pans as they can burn the steaks and leave the insides of them raw.

Spread the love
2
2
Shares
2
Shares
2
Previous Post: « How To Cook The Perfect Kamado Joe Flank Steak
Next Post:  How To Reverse Sear Steak On Kamado Joe  »