One of the less common spices that we use in the kitchen is meat tenderizers. We get to use other ways to do the job but a question stands: seasoned meat tenderizer; does it work?

If you have barbecues often and are having trouble making the meat more tender, you should consider using some seasoning or techniques to tenderize it.

Seasoned meat tenderizers are not common but maybe you should try some things new. They are helpful in actually making the meat more tender and they also give more flavor.

One of the more common brands of seasoned meat tenderizers is from McCormick and their product is good. However, there are also some tricks that you need to learn for the job. 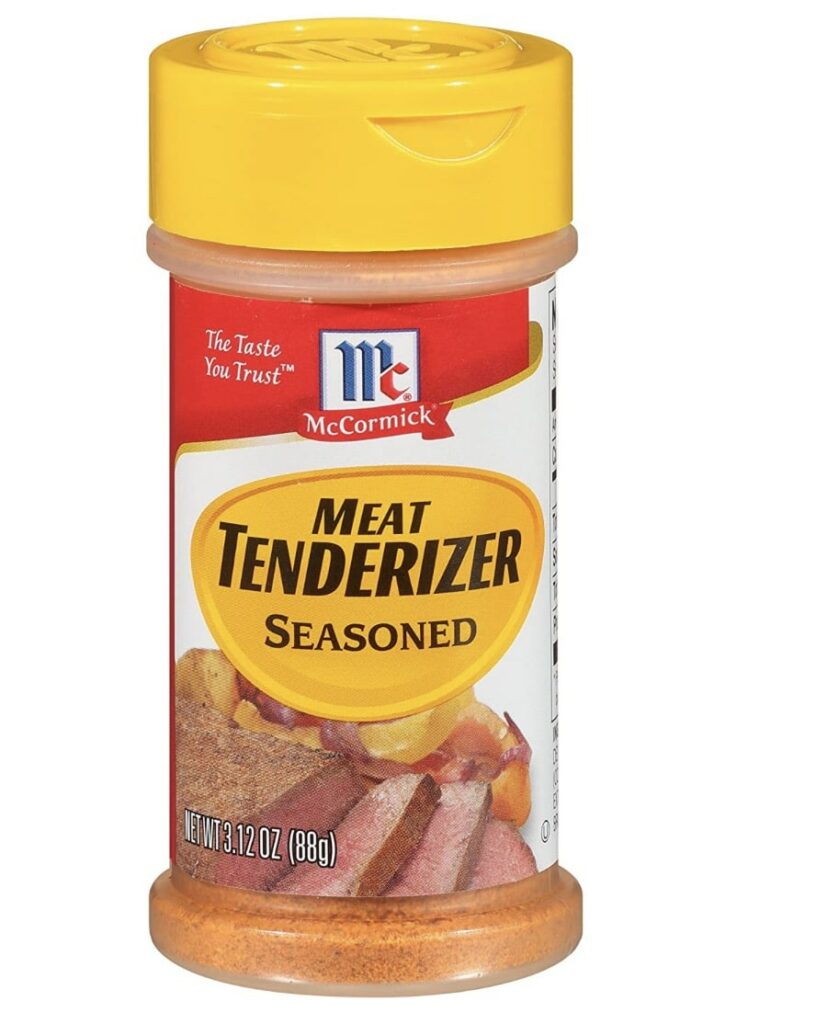 You cannot just expect the powder to magically tenderize the meat. You will also only test if the tenderizer works after waiting for a few minutes or sometimes even hours.

So here we will see if the seasoned meat tenderizer does its job. You can also read on to see some brief discussions on tricks and tips on how to tenderize your meat properly.

How Does It Work?

Seasoned meat tenderizers more often than not season the meat than tenderize it. There is a small difference in the texture but you will hardly notice it if you are not looking for it.

There are active ingredients in seasoned meat tenderizers and the main thing you see is usually salt, corn starch, sugar, and other common spices found in meat rubs.

The one active ingredient of a meat tenderizer that does the work is bromelain. This is a neutral enzyme that helps reduce the protein on the meat or at least reduce it in the process.

This enzyme is found on pineapples while there is also a version called papain which comes from papayas. They both have the same purpose and that is to de-naturalize the protein.

If used properly, these enzymes can tenderize the meat. However, you need to know how they work and what you can do to make them work better.

They are also very effective depending on the brand that you get. Sometimes, you need to make sure that you limit the amount of time you let the meat absorb the tenderizers.

Take note that seasoned meat tenderizers continue working and breaking down the protein on the meat. They do not stop working until the time that you start cooking the meat.

How To Use Seasoned Meat Tenderizers?

Some users often think that seasoned and powdered meat tenderizers should just be sprinkled and rubbed on the meat and that’s it, but this is not how you do it.

The first thing you will need to do is to make sure that the powder penetrates the meat. So score the meat or poke holes on one side of the meat with a fork before rubbing the tenderizer on it.

You can also cut the meat into smaller pieces if you do not necessarily need to cook the meat as a whole. The point is to make way for the meat tenderizer to reach the insides of the meat.

==> Check out my Favourite Meat Tenderizer!

Once you finish the process on one side, turn the meat around and do the same thing on that side. Repeat the process on the other meats and then leave it to rest for a few hours.

Other Ways To Tenderize Meat

While seasoned meat tenderizers are good, there are also some tricks that you can do to tenderize meat. You can manually do it without the help from other seasonings or enzymes.

The goal of tenderizing meat is to break up the tough ligaments and muscles on the meat. The best way to do that is to use a meat mallet pound on the meat to make it softer.

You just need to pound all sides of the meat and it will become tender. I figured that using metal meat mallets is easier since the weight adds to the pounding and softens the meat faster.

However, this technique is for meat that you do not want to flatten. So this is not an effective trick if you are cooking steak or briskets.

You can use marinades to soften the meat that you have. Liquids such as vinegar, white wine, pineapple or orange juice, lemon juice, and more can help break the muscles down slightly.

These marinades can add to the flavor of the meat so you can also experiment by mixing up some of the juices to attain a unique flavor that you might like.

Cooking thick slabs of meat is fun and mouth-watering but it is a huge disappointment if you end up with a juicy yet hard meat that you cannot even bite into or cut with a knife.

Seasoned meat tenderizers can help with that and you will be able to make the best steak and brisket with soft meat without sacrificing the flavor and taste of the meat.

There are also some tricks that you can do to make the meat more tender. Follow the simple tips above and you will be eating the best and softest meat that melts in your mouth!