There are many types of grills that you can buy, and there are also many companies that claim to be the best. This Rec-Tec and Traeger Pellet Grill comparison will see which one is better.

Regular grills are somehow outdated nowadays. There are many options to look for grills that have the most power and are easiest to control.

These two companies are known for their ability to produce grills that both have those qualities. They are not necessarily rivals, but their grills are undeniably similar in terms of functions.

The exceptional feature that puts these grills apart from other competitors is that you can control them easily, which means that you can cook while you are away from them.

Grills are perfect for parties and even simple cookouts. So what else can you bring to the table aside from the regular grill you have except for something even better? 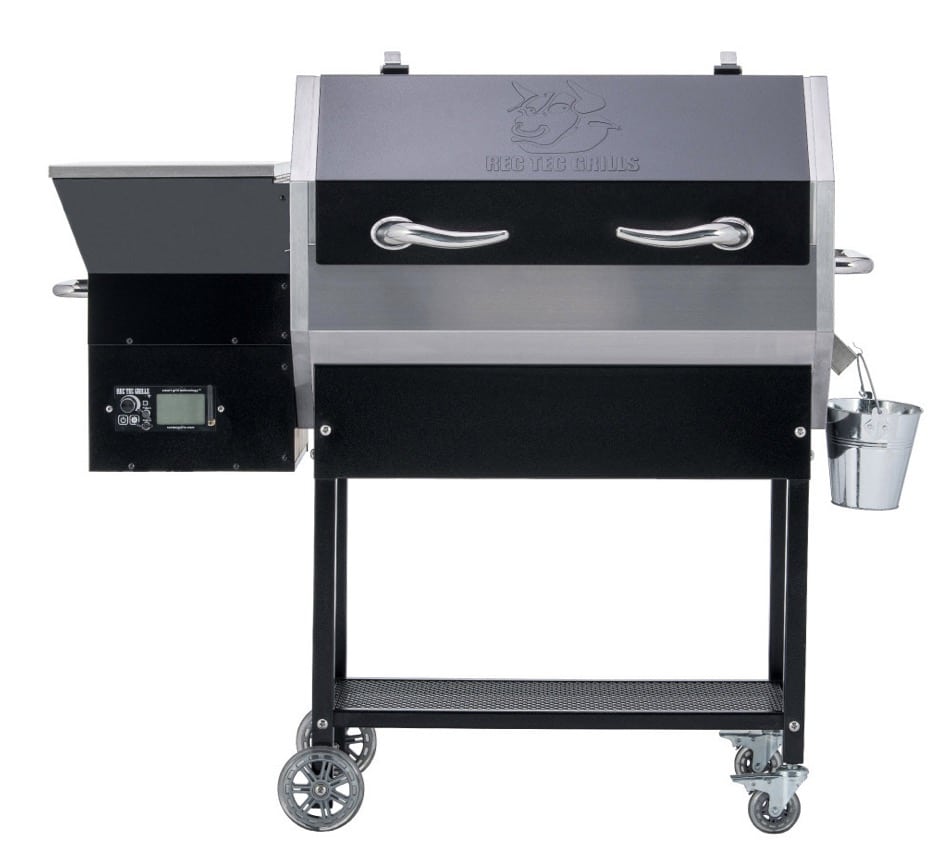 Both companies’ grills allow the user to grill without constantly opening the lid and looking inside the grills.

With that said, they do have differences that we should also talk about. It is a comparison post, but we will take a look at those similarities and differences.

We will discuss how these two grill companies differ and tackle why many people, instead of other brands, choose them.

So if you want to know more about them or if you just need a guide for you to choose the best grill that you can buy for your next backyard cookout, then continue reading.

Setting Up The Grills

Once the package comes into your house, there is not much to do except finding a place where you can put these grills on. They are pretty heavy, so you are going to need help.

Carrying these grills will be an impossible task for a single person. So if you want to place them in another area, make sure that you have help from a few of your friends to carry them.

Both grills have stands that have wheels on them, so moving them on a flat surface will not be a problem. The steps or inclines will be the issue when it comes to moving the grills.

You should consider when setting up the grills is the area where you want to put them in. The spot needs to be far from any flammable object yet near an electrical outlet.

The most viable way for you to keep the grills away from flammable objects and keep them near an electrical outlet is to use an extension cord safe from heat and water.

Since you will need to set the grills up outside, you risk getting the electrical outlet wet. So make sure that you use something that will protect the cord from electrical errors. 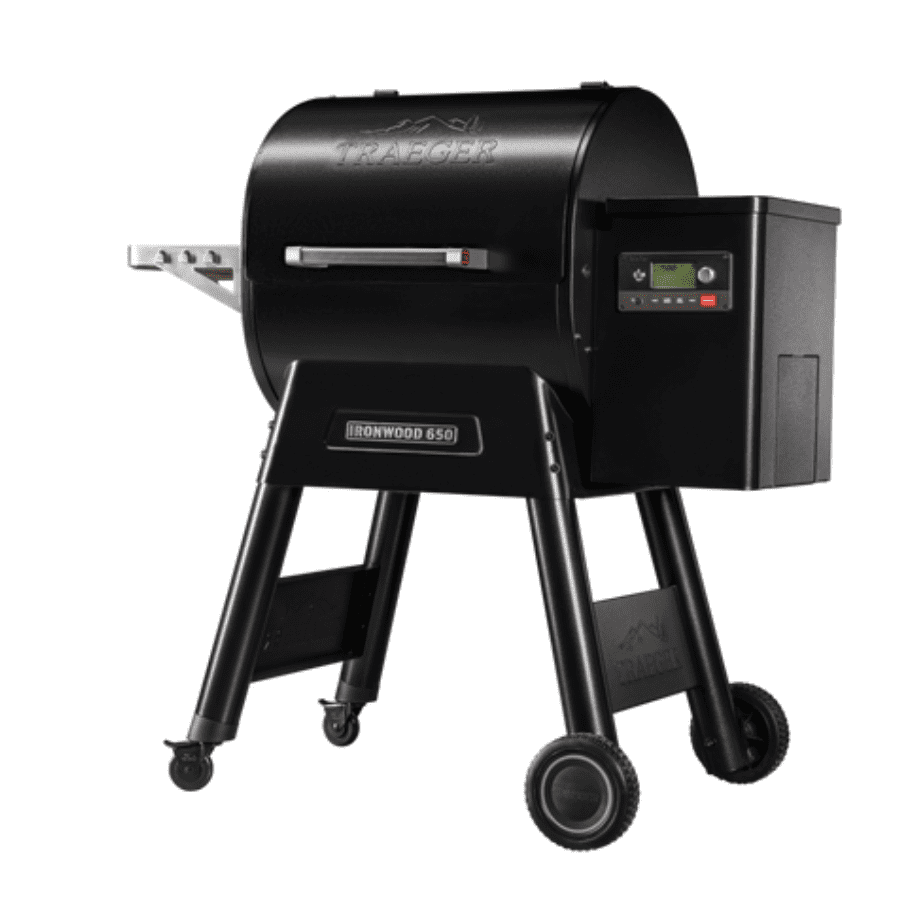 As long as the grills can cook the food you want, the design is not an issue. However, I think it is worth pointing out because, with these grills, the design is crucial.

Traeger grills are known for their bulky design; it is important because that implies you have a larger booking space within the chamber as it allows you to put multiple racks in it.

The Rec-Tec grills are smaller, or so they seem to be. The thing that makes Traeger grills look larger than Rec-Tec grills is that they have an extension on the pellets’ side.

The pellet hopper of Rec-Tec grills is at the back of the main cooking chamber, this is not only a simplistic and beautiful design, but it is also practical for cooking.

The pellet hopper on the back helps balance the grill’s weight when it is on its regular stand. From there, the pellets also just fall to the burners instead of climbing up.

Traeger grills have their pellet hoppers on the side, which means they need an auger mechanism to push the pellets into the burner, which takes more energy. 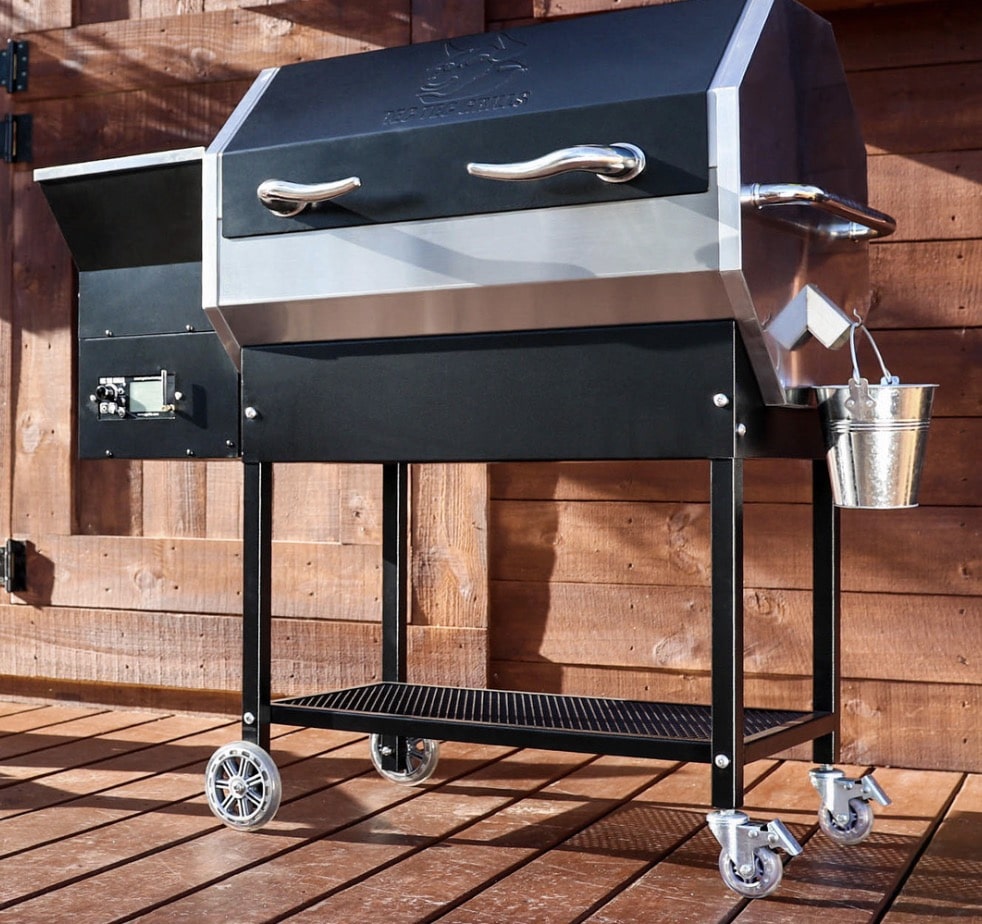 This feature is on both grills. It is a feature that allows the user to control the heat and the timer at a much faster rate and an easier interface to get a more accurate reading.

The grills use digital displays to see the temperature and other controls on their side; this is one reason why these grills need electricity to work.

Another reason why they need electricity is about the heat that they produce; they need it to just ignite the pellets.

Traeger and Rec-Tec grills have a metal rod underneath that heats up using electricity. From there, the pellets fire up, and then they can continue producing fire without the rod.

This Smart feature allows you to control the temperature and timer without lifting the lid off the grill and checking the temperature. Others use digital thermometers but not these grills.

Even though they use more advanced technology for the controls, these grills still rely on the accuracy, so both companies made built-in thermometers to get a more accurate read.

While you use electricity to ignite the pellets, these grills have another smart feature where control, although already easy, is made even easier for you.

Traeger initiated this feature where you can control the grills even if you are far from them. Rec-Tec immediately followed with the RT-700 to keep up with the modern world.

The WiFi feature means that the grills connect to your WiFi source when you turn them on. Once your phone connects to the same WiFi, you can control the grills through your device. 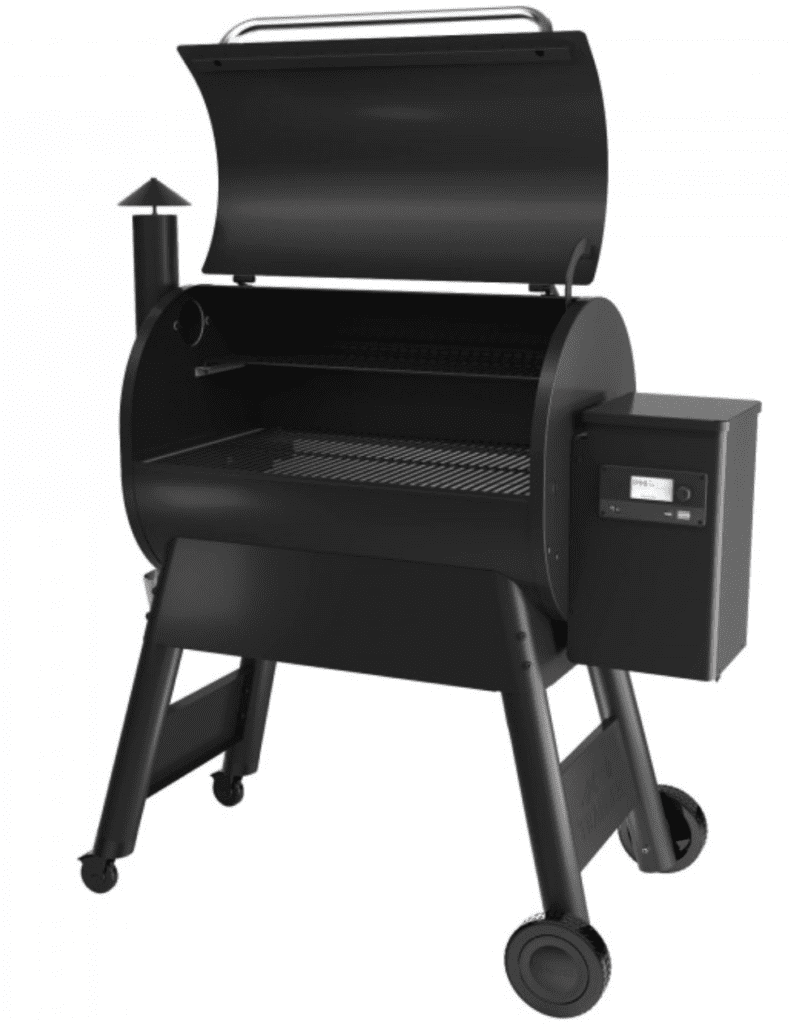 The hard thing about this is the initial connection. Both grills had a hard time connecting to the WiFi source when we tried to connect them for the first time.

However, once they are connected, you no longer need to set them up again as they automatically connect to the same WiFi source when you turn them on again.

The device has to stay connected to the same WiFi channel to control them. You also need to download the apps for the respective grills to gain full access and control.

The apps are pretty similar, and they have a great user interface. From there, you can just click or turn the dials that you need to match the temperature and timer of your recipe.

The advantage of the Traeger app is that it has some preset recipes. You can just click the specific recipe, and then the grill will take care of the temperature and timer.

Both apps also notify you when the cooking is complete. You also get notified on the phone if the temperature is off. In the case of some models, you are notified when the pellet hopper is near empty.

Performance, when it comes to grills, is all about the temperature range. This gives you an idea of how versatile the grills are so you can cook as many recipes as you want.

The lowest temperature can allow the user to smoke meat in a low and slow style of cooking. The highest ones, on the other hand, can cook pizzas in just five minutes.

Most grills from Traeger can only reach a temperature of 400 degrees Fahrenheit. While that is enough to sear meat on, you will be better off with a higher temperature. 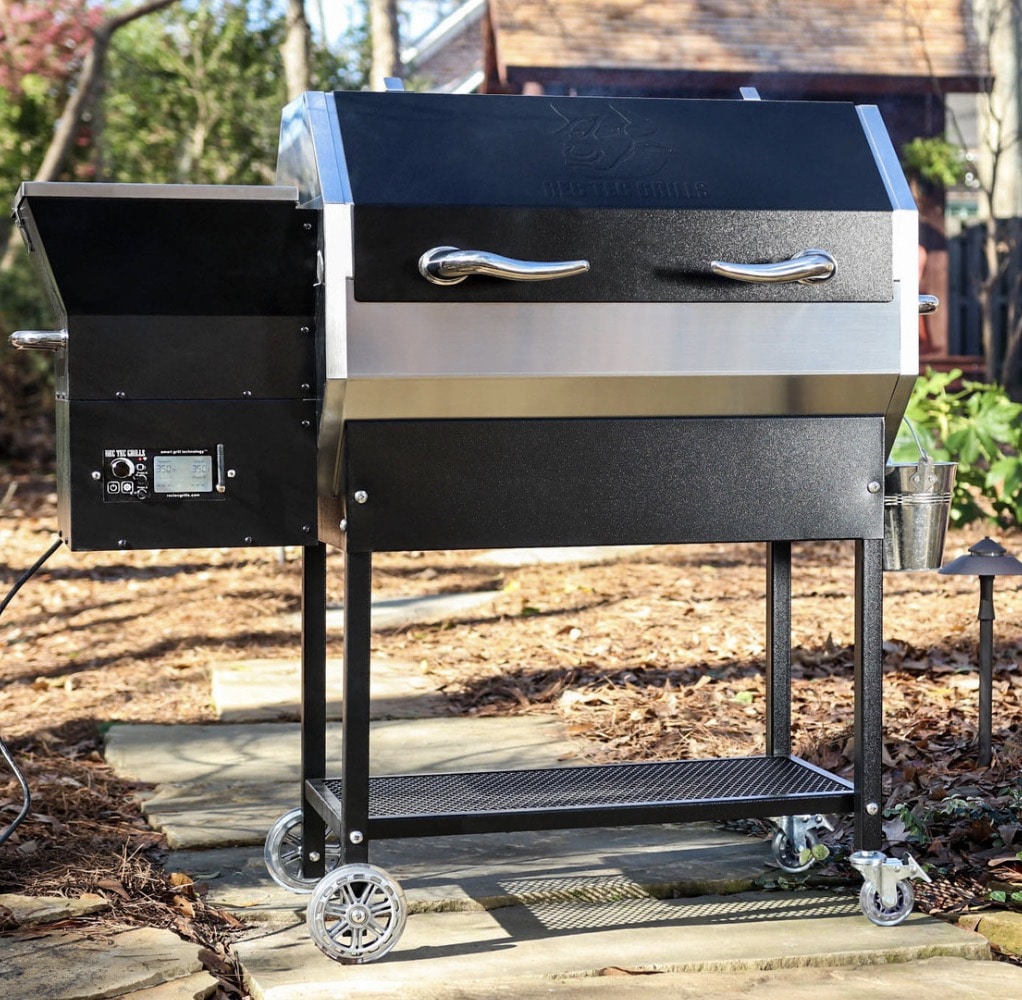 When it comes to the cooking surface that the grills offer, Traeger wins as they offer many options. You can go for small ones or go for over 1000 square inches of cooking space.

The largest model from Rec-Tec can give you a cooking space of around 700 square inches. This is enough for you to cook about 15 to 20 burgers at the same time.

The Traeger grills have this amount of space for cooking because of the design. The pill-shaped chamber allows you to put multiple racks within it and cook at different temperatures.

This means that you can sear meat on the bottom while keeping your burgers or other foods warm on the top rack. You can also smoke in the Traeger grills as it can go for lower temperatures.

The largest Traeger grills have a pellet hopper capacity of a little over 26 pounds. If you cook in a slow and low process, that much pellet can last for up to 12 hours.

With the notification being in play, you can easily know if the pellet hoppers need refilling. You can then refill them by just opening the hoppers on top and then fill it up.

Some of the Traeger grills have a feature that allows them to smoke meat in the best way possible. They can turn on the theD2-Drive feature, which is composed of a fan.

If you want the temperature to go higher, the fan can turn to 100 rotations every minute. You can also use it to slow down the smoke it emits as the fan can go to slow rotations.

As for the Rec-Tec grills, they prioritize cleanliness. The Smart Grease Management System of the grills catches the grease from the meat and then takes them out of the grill.

Other accessories included in both grills, but these, I think, are the most important ones. You can check out the other features from the companies’ respective websites.

Cooking In The Grills

If I were to describe the experience of cooking in these grills, the word would be “Easy.” They offer a lot of features that make cooking in them pretty easy and less hassle.

==> Get the Best Deals on Traeger Pellet Grills

The Traeger grills, since they offer a lot of cooking space, is perfect for parties. You can cook multiple foods simultaneously, so you do not wait for every meal you want.

The Rec-Tec grills are perfect for just hanging out with a few friends. You can cook with them for long periods of time without needing to physically control the grill.

The results are also pretty amazing. The grills from both companies were able to produce the best results on any food you want, whether steaks, pizzas, smoked meats, and more.

Traeger grills are considered the pioneers of smart grills. Their users can perform other activities while cooking in the grills without worrying about any failed recipes.

Rec-Tec now has this feature, so it has become a tight competition. Both grills can cook perfectly and are very versatile in terms of the recipes that they can cook.

==> Get the Best Deal on the Rec Tec Grill

While one grill has an advantage over the other, they are undeniably similar. Choosing one will be a hard task, and it will depend on the buyer’s preference.

So if you want a grill that can get to high temperatures and last long when cooking, Rec-Tec grills are the better choice as they offer a lot of room for the pellets.

But if you want to go with a more advanced grill or is more proven when it comes to the ease of control, then the Traeger grills are yet to be matched, and you should get one.

Spread the love
2
2
Shares
2
Shares
2
Previous Post: « Can you Sear Meat on a Pellet Grill?- Everything on Searing!
Next Post: Ooni Pro Pizza Oven Review- 2022 »