Ooni, previously Uuni, is a company that has been around for a little less than a decade. I have been a fan of them, and this Ooni Pro review is just one example of why they are amazing.

The company started in 2012 with a Kickstarter Campaign where they introduced one of the early models of their pizza ovens. They garnered the amount quickly, and it was all success from there.

They have produced many models, and one thing was always visible. The design was very distinct in that you can identify an Ooni pizza oven immediately when you see one.

Another trademark of this company is its portable designs. They have made pizza ovens that can cook like a large brick oven but are smaller than the conventional ovens.

Ooni Pro is the largest model from Ooni, and so fans were somewhat worried about its performance. 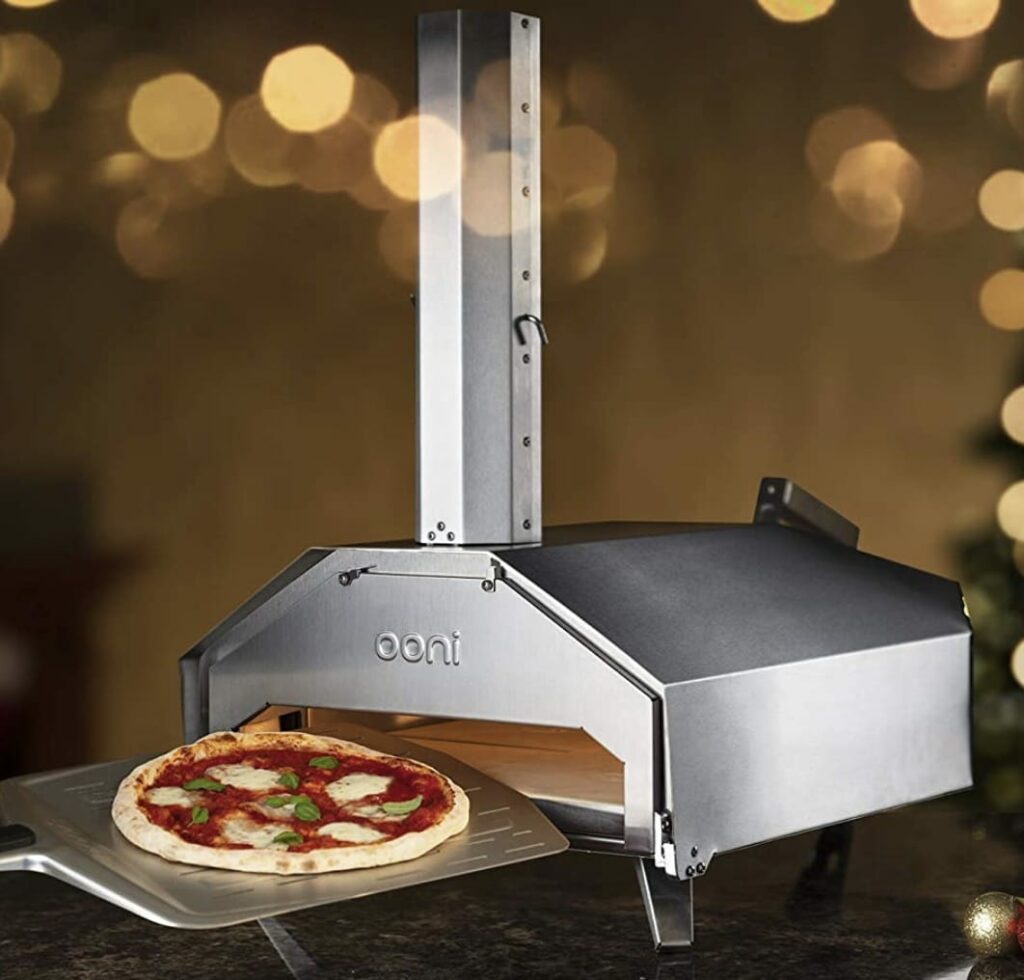 See, the smaller pizza ovens were able to produce great heat for cooking the pizza because they were well-insulated, and the burners did not have to heat such a large compartment.

With the Ooni Pro measuring almost 3 feet in length, fans wondered whether it could heat the large interior. Here’s a spoiler alert; it most certainly can, so no need to worry.

So in this review, we will look at all the features that the Ooni Pro brings to the table to know what makes it very powerful despite the size that it needs to heat up.

Keep on reading as we dive into the details about this pizza oven. This will also include a little bit of a first-hand experience that we will share with you to better understand how it works.

Setting Up The Ooni Pro

Depending on the fuel that you use, the setup will be a little different. But generally, this pizza oven is relatively easy to assemble without the help of experts or professionals.

You only need to screw in some parts, such as the door, and assemble the chimney on top. From there, the fully assembled Ooni Pro will weigh around 26 kilograms, pretty heavy for an oven.

So if you are planning to regularly use this pizza oven, you need to set it up in an area where you would not have to worry about moving it frequently as it is a bit heavy.

Bringing it with you on picnics and camping trips might be a bit of a struggle unless you have a large compartment to put the pizza oven on. So it is meant for backyard cooking. 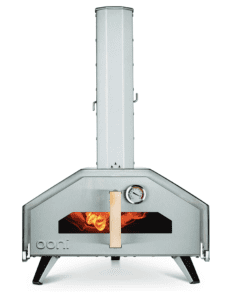 So when you put the Ooni Pro in your backyard, make sure to place it on top of a sturdy table. Tall enough to put the gas tank under if you want to use that option.

Also, use a table where you can set up the security loop in. This feature allows you to set up the Ooni Pro in place and prevent it from moving when you are cooking in it.

See, there are different fuels that you can use with this pizza oven. With that said, let us move on to the features of the Ooni Pro to see what else it can do with its other options.

You need to consider before buying a pizza oven is all about the fuel that it uses, whether you can use it with a more consistent gas fuel or with more traditional wood fuel.

The Ooni Pro is one of the most versatile pizza ovens when it comes to fuel. You can use either wood or charcoal, pellets, and even propane gas to power this pizza oven.

Wood is the classic way to heat an oven, and most experts also prefer it. The wood provides smoke that can add to your pizza’s flavor, especially when it has meat toppings.

Charcoal can also do this, but it does not produce as much smoke as wood. On the other hand, pellets can produce the same amount and quality of smoke that regular chips of wood have.

Since you can use all of those types of fuel, the main thing about Ooni Pro is its versatility of cooking. You can put other flavors on your pizza aside from the toppings that it has.

The gas option is also a great choice as it is the most consistent source of heat. The fire that gas produces continuously heats the oven, so the large interior is heated up quickly.

The fuel options problem is that not all burner attachments come with the Ooni Pro; you still have to purchase the separate burners for the pellet and gas fuels.

The Ooni Pro can produce crispy crusts on your pizza every time you cook one; this is because of the cordierite stone inside the oven that helps in cooking.

Cordierite is one of the strongest materials when it comes to producing pizza stones. It is durable and can resist thermal shock, so it hardly breaks or cracks under intense heat.

The Ooni Pro pizza oven has an interior that is larger than most pizza ovens. It has more than 17 inches in length, so you can surely cook 16-inch pizzas in it.

However, the problem is that you can produce a large pizza stone covering that area, but it is too risky. The larger the pizza stone, the more likely it will break if not handled properly.

Pizza stones also expand and contract when applied to certain temperatures. That is why putting a single large pizza stone inside the Ooni Pro would mean that it would break easily.

So Ooni made sure that does not happen and produced smaller, smaller pizza stones but can fit into the oven when put together. This way, they have a small space to expand when needed.

So with this simple yet genius idea, the Ooni Pro can cook pizzas with a great crispy crust without the user having to worry about the pizza stones cracking or breaking under the heat.

As I have said, the Ooni Pro is a very large pizza oven that has a very large interior. That is why it needs to be insulated perfectly to maintain the heat inside it.

The burners are fine. They do their job in heating the interior, but you need something else to keep the temperature even and consistent inside the oven when cooking.

So Ooni made two different doors for this pizza oven. The first door is a completely closed one but has a glass opening in the middle so you can look at the pizza you are cooking with the door on.

This door also has a thermometer to see whether or not it is doing its job in maintaining the temperature. The other door is pretty much the same, only that it is open in a way.

The second door has a letterbox-style hole in the middle where you can slide the pizza in and out of the oven. It is also used as a proper vent for the airflow to be consistent.

You can switch the doors easily by snapping them on with a click.

Handling the doors is also not a problem as their handles is all wood, so you can touch them even when the oven is hot. 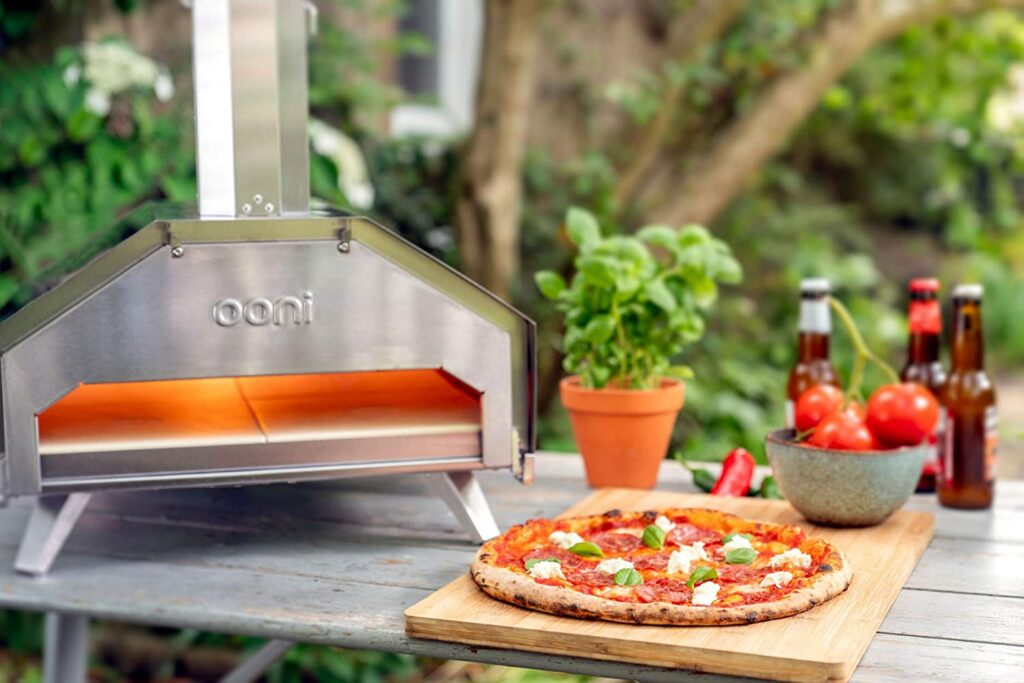 One of the Ooni Pro’s best features is the amazing ventilation and airflow that helps keep the oven’s heat; this is made possible by three main factors.

First is the chimney, where you can either turn up the heat or control it to a lower temperature.

The chimney has a cap that protects the interior of the oven from rain and other liquids.

It also has a lever where you can control the amount of air that goes through it.

If you think that there is too much heat, you can cover the chimney to completely lock the air in the oven.

However, for the fire to keep going, you need oxygen.

So the second vent that allows proper airflow to happen in it is in the second door that the pizza oven has.

It has a hole that brings in air and gets it out; this allows the pizza oven to keep producing flames needed to cook while also keeping the air in check.

The third vent that you can use with this pizza oven is on the sides. It has hidden vents that use the space between the ceiling of the oven and the shell.

The smoke or the air inside the oven is sucked in the interior’s sides and moves up towards the ceiling; this keeps the shell and interior heated while also allowing air to escape.

Cooking In The Ooni Pro

With all the power and features needed to cook a perfect pizza, the Ooni Pro is one of the best pizza ovens on the market right now, so I decided to see how well it performs.

First off, I want to start with charcoal and wood fuels. They do heat up quickly, and they allow the pizza oven to heat up to its maximum temperature when preheated for about 30 minutes.

However, it was a little bit hard to control. It does well when you only want to cook a single pizza, but you need to refill it frequently if you need to cook multiple pizzas in a single cooking session.

It cooks perfect pizzas in just minutes and puts extra flavors to it as well.

The gas option was relatively easier than the other fuels. The consistent heat from the gas fuel allows the Pro to reach its maximum temperature in just 20 minutes of preheating.

The Ooni PPro’smaximum temperature is 932 degrees Fahrenheit. This amount of heat can cook pizzas in just 60 seconds and perfect conditions; it can even go for faster cooking time.

Overall, the Ooni Pro can produce the best pizzas that most ovens will not be able to do. The stones come with great help, and the extra space was also helpful.

When you cook large 16-inch pizzas in the Ooni Pro, you have enough space to turn the pizza around when needed to prevent burning one side of the pizza.

The Ooni Pro burners are at the back; it is that part where the heat is more intense, so turning the pizza twice or thrice will be necessary.

One of the best features of most Ooni pizza ovens is the portability. While they have removed that from the Ooni Pro, you can still bring it over to your friend’s backyard.

It is only 26 kilograms, so you can still carry it around. It is the largest pizza oven from Ooni, so the benefit of this is that you can cook large pizzas for large parties.

With its immense power, the Ooni Pro can cook 16-inch pizzas in just 60 seconds. That is why it is perfect for parties with many guests as the Pro can cook quickly.

There are other pizza ovens from Ooni, like the Ooni Koda 16, Ooni Karu 12, Ooni Fyra 12, and Ooni Koda 12, so make sure to check them out to buy a budget pizza oven.

So if you are a pizza lover and want to get something that will help you cook your pizzas with your preferred flavors, you should invest in a pizza oven.

If you also love gatherings, whether it be big parties or just a simple cookout in the backyard with a few friends, the Ooni Pro is the perfect pizza oven for you.