This simple yet special beef London broil recipe on a Traeger grill will have your mouth watering from the moment you start cooking.

It is a very easy recipe that you can do with your grill.

There are many ways to cook this kind of recipe but doing it on a Traeger grill takes your food to a whole new level.

It can make your food super juicy and tasty with the perfect beefy flavor.

The only issue you might have with this recipe is that it is going to take some time.

You need to let the marinade sit for quite a while to keep the meat flavorful so do it ahead of time. 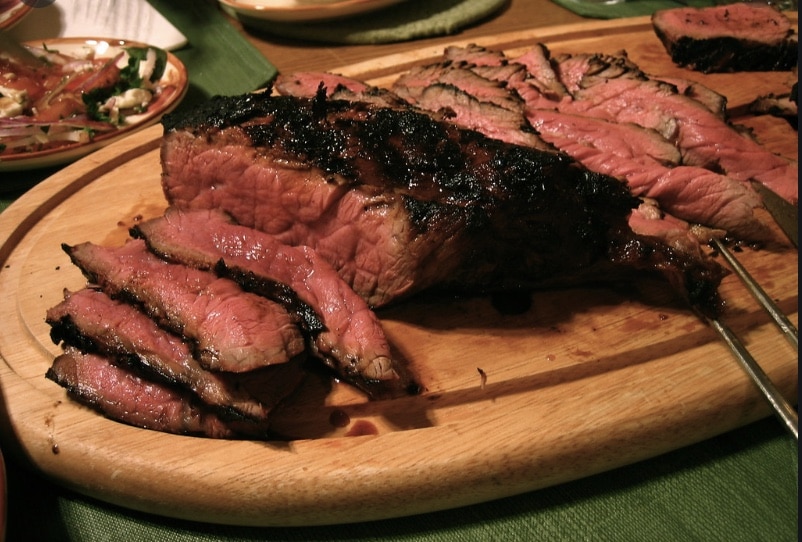 There is a special ingredient here if you want to follow the original Traeger recipe.

The great thing about this is that you can also edit the ingredients later on once you master the recipe.

Cooking at home with a versatile grill such as Traeger is a beneficial way to make your food. You can add or remove ingredients that you want to make the recipe more familiar.

However, you need to know the basics of this recipe to properly edit the ingredients. So follow the recipe below and get your best Best London Broil recipe with it.

The cut of meat you are going to use in this recipe is already full of flavor, but you need to extract more from the meat to get the best flavor. This might make it dry later on, so there is another way.

You need to make the best marinade to keep the meat juicy while also giving it a lot of flavors. For the marinade, you will need to get the following ingredients and mix them.

Since London beef is not truly a cut of meat but it is more of a cooking style. However, certain cuts of meat are great for this recipe, and I recommend getting them for this one.

For example, if you are in the mood for a soft steak full of flavors, you can get around or flank steak. It is an easy cut of meat to cook, so make sure to get it if you want that type of meat.

They also have a small fat content, so although these cuts of meat can become soft, they are tricky to cook, so make sure that you do the proper way of cooking them to make them soft.

Remember that the highlight of this recipe is the beef and the marinade. So do not solely concentrate on one and make sure that you get the best ingredients for both of these.

Again, this recipe will take a lot of time, so I suggest doing the marinade or marinating the cuts of meat the night before you are planning to cook this recipe to save time in cooking.

Get a medium bowl and then mix the red wine vinegar, soy sauce, water, onion, garlic, olive oil, pepper, ketchup, and sugar. Whisk them together until the mixture has an even consistency.

I prefer just cutting the onions and garlic into small bits instead of grinding or grating them. That way, you get more of the flavors distributed into the mix instead of a very concentrated one.

After whisking the mixture, set it aside, and then prepare the tools you will need to cook. While doing so, make sure that the grill is also ready for preheating or is already preheating.

If the beef is frozen, get them out of the freezer and thaw them. Make sure that it is soft before putting it in the marinade so that the meat can absorb as many flavors as it can when done.

Once you think that the marinade is already seeping into the meat, place the bag inside the fridge and then let it refrigerate for at least 6 hours or leave it in the fridge overnight.

After at least 6 hours in the fridge, remove the steak from the fridge and then let it come down to room temperature. Keep the steak inside the resealable bag to let the marinade sit longer.

Preheat the Traeger grill as well so you can cook right away once the meat is ready. Set the grill temperature to 180 degrees Fahrenheit and then let it preheat for a few minutes.

Close the lid to enhance the heating power of the grill and let it preheat for at least 15 minutes with the grill lid closed. While waiting, prepare the tongs, grill spatula, and everything you need.

This one is optional, but if you want to follow the original Traeger recipe, then you should follow this. Get a small bowl and mix the ingredients for the Blue cheese butter.

You will need butter, scallion, blue cheese, Worcestershire sauce, and pepper. Again you can edit the ingredients and make other versions of this butter, but this is the best option.

Once the steaks are at room temperature, discard the marinade and pat dry the steaks with a paper towel. Use the Traeger Beef Rub and cover the steaks on all sides with it.

Lay the steaks directly on the grill grates and then let them smoke for at least 60 minutes.

Close the lid to take advantage of the temperature and the smoke that the pellets provide.

One way to make the recipe better is to select the type of pellets you use.

You can choose any type, but it is better to choose pellets that will combine well with the recipe’s flavors.

After an hour, remove the steaks from the grill and then place them on a platter.

Increase the grill temperature to 500 degrees Fahrenheit and close the lid again to let it preheat.

Once the grill is ready, return the steaks to the grill and then close the lid.

Insert a meat probe into the thickest part of the steak and let them cook to the desired temperature or doneness.

For a medium-rare finish, you need the meat probe to read 130 degrees Fahrenheit, which will take around 15 to 20 minutes of cooking time.

Make sure to reach that internal temperature.

Once the meat probe reads the temperature you want the steaks to be at, remove the steaks from the grill and rest for 3 to 5 minutes before slicing through the meat.

Cut the meat diagonally into thin slices and then serve it with the Blue cheese butter.

Beef London Broil is a cooking method that involves the process of smoking the meat first. It is a shortened version of the reverse searing method used with thick cuts.

It makes the steak super tender and juicy so both adults and kids can enjoy it.

The flavors from the marinade accentuate along with the meaty flavor of the steak and the blue cheese butter.

Make sure to follow the recipe above or make your marinade and butter for a more familiar taste to your Beef London Broil recipe!