Cooking outdoors is one of the most satisfying activities you can do around the house.

That makes it easier if you use either the Cuisinart 360 XL Griddle or Blackstone 1554 Grill.

When it comes to cooking outdoors, you cannot deny the efficiency and ease of use with griddles or grills.

They are perfect for almost any type of food that you want to cook and serve.

We will be comparing and contrasting these two here in this post are the perfect match for each other.

They are great at cooking almost anything and can do it so well.

The Cuisinart 360 XL Griddle has a great cooking capability that allows you to make the best sausages, pancakes, steaks, stir-fried vegetables, and many more recipes that you want. 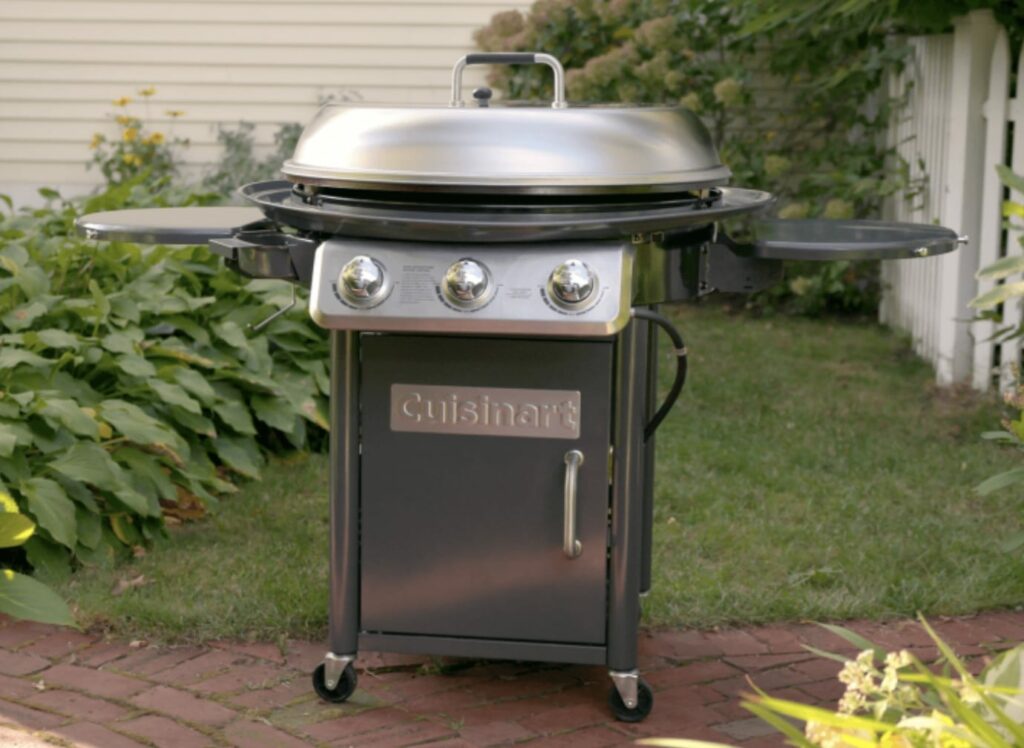 The same goes with the Blackstone 1554 Grill as it can cook any food that you want. Both grills can perfect the food that you are trying to cook because of their amazing features.

Speaking of features, they have differences in the details and features that come with them. So that is what we are going to discuss over in this post so read on.

How To Get Started

These griddles are made just like most griddles that you see on the market.

They can be easily placed on your patio or in your backyard and start cooking right away with your amazing meal.

However, there are some things that you need to consider when setting them up.

These griddles come in basically assembled but you have some assembly to do especially with the Cuisinart.

You will need to screw in some parts in place before cooking.

The top griddle is already there but you will need to install the shelf and the cabinet before setting up the fuel tank.

All you need is a screwdriver to screw the parts properly in place.

After that, you can connect the propane gas tank to the griddle and it will be ready to cook your food in just a few minutes.

The Blackstone 1554 grill is pretty easy to set up as there are no assemblies needed. 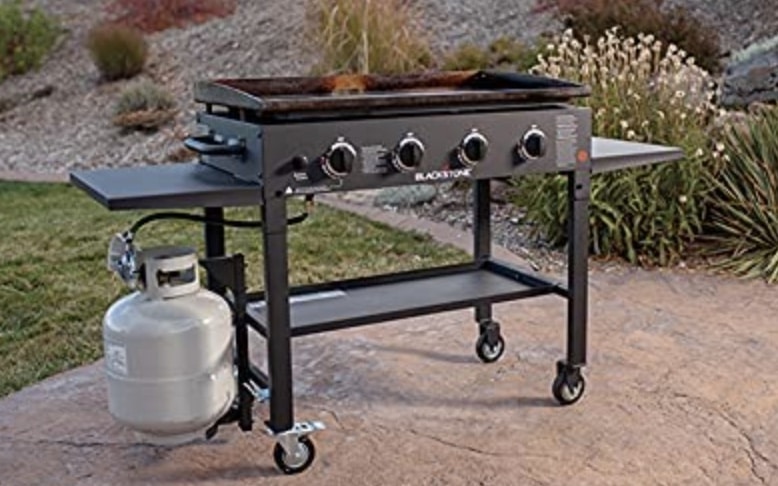 Just place it where you want the griddle to be and then start cooking your food.

Both of these grills have their own space underneath where you can place the propane gas tank in.

There is no need for extra space for the gas tank as you can put it right under the griddle.

I recommend setting the Cuisinart 360 XL Griddle on grass or gravel as it does not have locks on its wheels. The Blackstone 1554 grill can be placed on harder surfaces and lock the wheels.

From there, you can start cooking and move the griddles wherever in your backyard. Just make sure that there are no flammable objects near them as they might catch fire when cooking.

This is perhaps the most obvious difference between the two. The Blackstone 1554 is like your standard griddle with a rectangular cooking surface to maximize the space for cooking.

There is a total of 720 square inches of cooking space on this griddle. This large cooking space can cook up to 28 burgers, 15 steaks, or over 70 hotdogs at once for a large group.

You can use this griddle if you are having a party in your backyard, with just one go, you can feed over 10 people in just minutes of cooking so it is great for gatherings and parties.

The unique thing about the Cuisinart 360 XL griddle is not only the space for cooking but also its shape. It is where it gets its name as the cooking surface of this griddle is a circular one.

So it does not look like the more common rectangular griddles.

It does have a large cooking surface too since it can cook about 25 burgers or 10 steaks at a time so it is not that small. 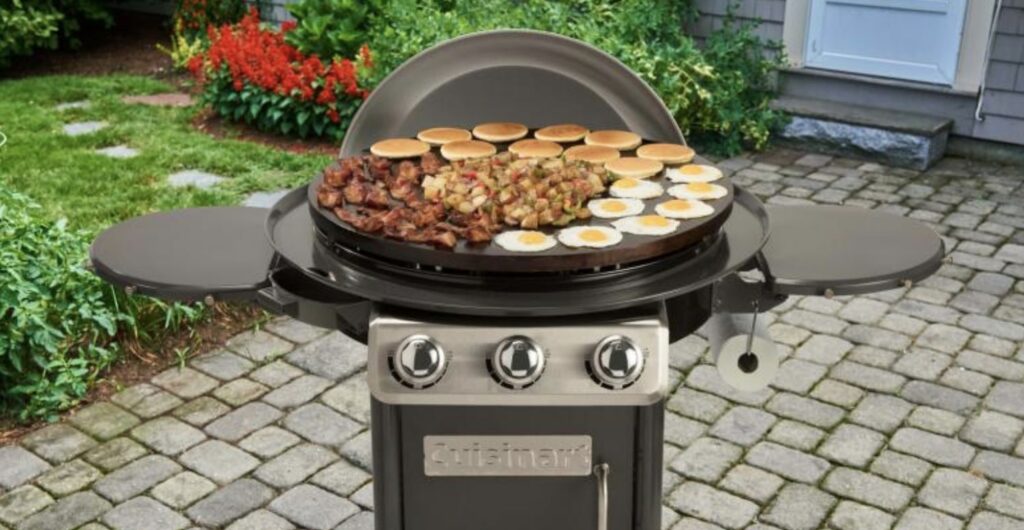 With a total of 700 square inches for its cooking space, this griddle can feed up to 10 people in just one cooking session. The cooking space is really easy to manage because of the lack of walls.

How Hot Can They Get?

These griddles have a different structure when it comes to the burners. Since their cooking surfaces have different shapes, the burners are also set to maximize heating them.

The Blackstone 1554 grill has four powerful burners that are placed evenly under the cooking surface.

These burners give even heat throughout the cooking surface for even cooking.

The Cuisinart 360 XL griddle has three burners but I like to consider it four as the middle burner is separated into two rows of burners. That gives the circular cooking surface even heat.

Both of these griddles have independent controls on each of their burners. That means you can heat one side of the cooking surface while keeping the other side a bit colder.

Since the burners give even heat on the cooking surface, you can cook one recipe or make different foods or types of recipes on them with the independent controls on the burners.

The Blackstone 1554 grill can get up to 560 degrees Fahrenheit with the burners. Each burner has 15,000 BTUs and has a total of 60,000 BTUs, a little short for its cooking surface.

The Cuisinart 360 XL griddle is also powerful with its burners that can produce up to 650 degrees Fahrenheit.However, it has a lower BTU with only 45,000 BTUs on the griddle.

First Time Cooking In The Griddles

Meaning I could go around and manage the other foods on the other side where I started from.

There are no obstructions aside from the side tables but I was able to manage that easily.

The food came out great when I tried cooking steaks and sausages in it.

The grease easily fell off the cooking space because it does not have walls so cleaning up while cooking is unnecessary.

However, because it does not have walls, there are times when I needed to chase the sausages on the edge. It is pretty difficult to cook food such as hotdog in this griddle.

The Blackstone 1554 grill solves that as it has a lip or wall on all sides.

The only way the food will escape from this griddle is by the grease drip on the backside of the griddle.

However, I did not have the problem of food falling off this griddle. The grease discharge is easy by using a grill spatula to push the grease on the back, just be careful with the food.

The food cooked on this grill is perfect as I did not have to worry about hot grease dripping. Managing the food in the Blackstone griddle is easier than in the Cuisinart.

Nonetheless, both griddles were able to cook food just the way I wanted them to.

All food came out great and cleaning the grills was not as hard as they might put it out to be.

Aside from the cabinet or compartment underneath the griddles, other accessories come with these griddles that can ease your cooking experience.

The Cuisinart 360 XL griddle has its stainless steel lid which is perfect for maintaining the temperature inside the cooking space. This can also help when you are cooking pizzas.

There is no lid included in the Blackstone 1554 grill so you will need to buy a separate one. You see the same accessory in both and that is the pretty useful side shelf.

You do not have to prepare the food from afar and transfer it to the griddles as you can do that on the side shelf. You can also place your tools on the hooks on the shelves for convenience.

You can do this with the Blackstone 1554 grill as you only need to push the grease onto the back of the griddle surface and the grease will automatically fall into the grease catcher behind it.

The Cuisinart 360 griddle is a little different since it has a circular cooking surface. The grease automatically falls on the canal around the griddle and then into a hole behind it.

What makes the Cuisinart griddle better when it comes to maintenance is that it has a non-stick surface. You only need to wipe it with a paper towel and there are no food residuals.

You need a more thorough cleaning on the Blackstone griddle now and then as the steel cooking surface tends to gather food residuals and blackens after a long time cooking with it.

If you love cooking several types of food in one go, then these griddles are for you. They are powerful enough to cook almost anything and you can even cook different recipes at once.

The Cuisinart 360 griddle is great for cooking much food as you can have an assistant on the other side to manage the food that is a bit harder to reach from your side.

The Blackstone 1554 grill is perfect for cooking if you are the only one cooking as the food is easy to manage and will not fall off the griddle easily.

So it is up to you which one is better for your cookout!