Kamado grills are a type of grill first invented in China and is now a widespread booking appliance. It has modernized but the concept is still in most models.

It is also considered a style of cooking that involves using clay and a lot of heat inside. You cook the food with lesser fuel as it is a technique that retains heat very well while you are cooking.

Tomahawk steak is one of the more expensive cuts of meat but it is definitely worth its price. It is a big cut of meat with a long bone protruding out of it making it look like a large hammer. 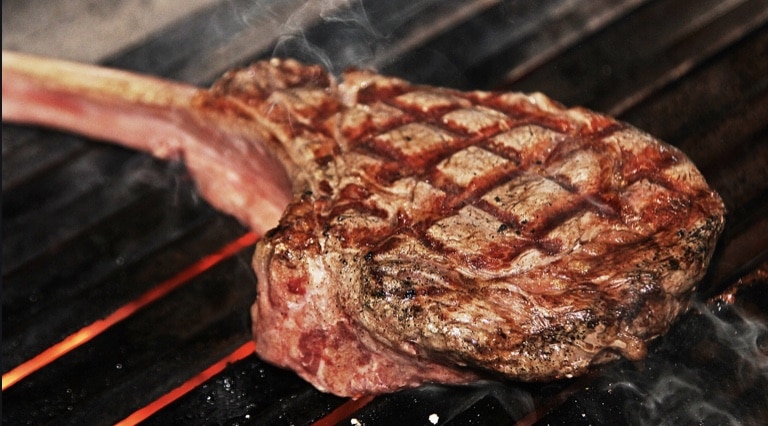 It contains a lot of protein and it is usually softer and more flavorful than other cuts of meat because of the bone-in structure. It cooks easily but you can also make mistakes.

There are some specific steps and timing that you need to follow to cook the tomahawk properly. Luckily, you have the Big Green Egg to do that so this process will not be as hard.

The secret behind cooking the perfect Tomahawk steak on the Kamado grill is to not overdo the seasoning. There are many choices for the rub or seasoning but you will not need a lot of it.

As I have mentioned above, the tomahawk steak is already full of delicious meaty flavors. You do not get all the taste and flavors from the seasoning as the mean has flavors of its own.

A simple combination of sea salt and ground black pepper is all you need to season the steak. You can also go with your favorite seasoning if you have one or a light rub will perfectly do.

Another seasoning that I have tried and as long as you do not overdo it will make a great tomahawk steak. Just combine a little bit of soy sauce and Montreal seasoning

You can add some spices that you want to the seasoning to add a little bit of flavor to the steak. The secret is not the amount of seasoning but how long you let the steak soak it in.

As for the tomahawk steak itself, you can get it from the nearest butcher shop. It is quite an in-demand cut especially with high-end restaurants so you might want to get it early.

Selecting the best tomahawk steak is not that hard. Make sure for a decent amount of fat along the outside of the bone and a little fat inside the steak.

The fats inside are what make the meat soft when you cook it later on. A perfect marbling for a tomahawk steak is when there are up to two slightly large patches of fats in between the meat.

It will reduce the steak’s size but generally, it also makes it juicy later on during the cooking process. So ask for a tomahawk steak that has a nice marbling to it.

Step 1: Prepare And Clean The Steak

One other bonus when you order the tomahawk steak is to have it cleaned or trimmed. That way, you will not need to do the sightly tedious task yourself and get to cooking right away.

However, just if you got a tomahawk steak that is still uncleaned or untrimmed, you need to remove the skin first. Use a fillet knife and do not remove too much fat from the inside.

Do this by running the knife on the bone while you pull the bone towards you. Usually, the meat that sticks on the bones are membranes that separate the real meat from the bone itself.

So there is no need to save that part of the tomahawk steak. Again, it will be more beneficial and easier to let the butcher do it to just season the steaks right away.

Step 2: Preheat The Big Green Egg And Season The Steak

Let the Kamado grill get up to 130 degrees Fahrenheit while you season the tomahawk steaks. Place the ribs on a roasting rack before putting them on a drip pan and then season them.

You can either season the steaks right now or do it later after they cook. The benefit you get from seasoning the steaks before grilling is that you get the salt deeper in.

Seasoning the steaks after the grilling will let the salt melt on the surface, giving you a great flavor while also making the tomahawk steaks’ meaty flavor stand out with every bite.

Place a meat probe inside the core of the steaks and then put the pan in the grid. If you have the Big Green Egg dual probe remote thermometer, that would be great for a better guide.

Set the temperature on the meat probe to 48 degrees Celsius which is around 120 degrees Fahrenheit. Wait for the Big Green Egg kamado girl to reach the desired temperature.

Place the steaks inside the Big Green Egg and then close the lid. Leave them to cook for approximately 4 hours or until the meat probe reads the steaks getting to the set temperature.

Once the tomahawk steaks reach the desired internal temperature, remove them from the Big Green Egg and then remove the grill’s grid and replace them with the cast-iron grid.

Add more fuel to the firebox and then set the temperature of the grill to 250 degrees Fahrenheit. While waiting for the grill to reach the desired temperature, cut the tomahawk steaks separately.

Get the tomahawk steak and hold them with the bones facing up. Use a sharp knife to cut in between the bones to separate the steaks from each other and then let them rest for a little bit.

Place the tomahawk steaks on the cast-iron grid and then let them cook with the lid closed. Open after one minute and then turn the steaks around to create a chequered sear mark.

Close the lid for another minute before flipping the steaks over and then repeat the process. Add more salt and ground black pepper on the steaks if needed and then set them to rest a bit.

What Is The Perfect Internal Temperature For Tomahawk Steaks?

There is a standard internal temperature for most foods that need to ensure that the food cooks properly and there are no longer bacteria inside them.

The same goes with the tomahawk steak as you need to cook them until they reach an internal temperature of 145 degrees Fahrenheit and then they are safe to eat or bacteria-free.

At that temperature, the tomahawk steak is also on a medium-rare to medium doneness. So it is the perfect way to cook your tomahawk steak with nice seared outer parts and pink insides.

You can go for 160 degrees Fahrenheit if you want the steaks to go on the well-done finish. Measuring the internal temperature is not easy, so invest in a great meat probe for the job.

Tomahawk steaks are great and you can make them easily with the help of a Big Green Egg Kamado grill. Grilling them at home gives you more control over the cooking style you want.

A Big Green Egg Kamado grill gives you all the options that you need. You can cook the tomahawk steaks in a slow and low way to make sure it cooks all the way through.

Tomahawk steaks should be cooked slowly and well since they are thick. Searing them right away will only burn the outsides and leave the insides raw, so follow the simple instructions above!