As long as you have either the Ooni Pro 16 or Ooni Fyra 12, you will no longer need to order pizzas from restaurants. These pizza ovens will give everything that you need to cook the perfect pizza.

Yes, you get to save time processing the pizza yourself when you order, but you will not have much control over the ingredients you want to put in the pizza you ordered.

It is also more fun to cook your pizza at home because it gives you freedom. Freedom to choose the ingredients you put in freedom to put as many toppings as possible.

If possible conventional oven, you might get enough heat to cook pizza, but it would not be as authentic as it should be. That is why you need something else for the job. 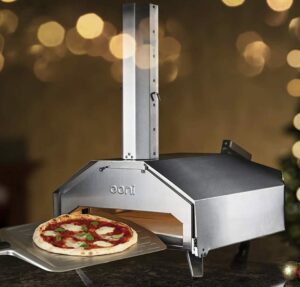 Pizza ovens are great since they can produce heat that will help you in making authentic pizzas. This is what every Ooni pizza oven brings to the table.

Ooni is a company that has led the pizza oven industry in producing products that are beyond amazing. They can outperform the competition and rise to the top with amazon ovens.

The Ooni Fyra is the latest pizza oven from Ooni’s original pizza oven series. It is the fourth installment of the series, and it has features that make it even better than the last model.

Ooni Pro is a newer model from Ooni and it has impressed many users since its release. It can cook large pizzas while also producing a lot of heat and range for different recipes.

You can cook almost anything in these pizza ovens solely because of their power. So if you want to know more, read on as we see what makes these two exceptional.

Significant Differences Between The Ooni Pro And Ooni Fyra

Before you purchase the pizza oven that you like, you will have to study and know everything about it. The differences between the two pizza ovens will be the determining factor.

You need to know which one fits your lifestyle better by knowing the features that one pizza oven has and the other does not. Ooni is great in making pizza ovens, but will it match your preference?

Here, we will see what makes one pizza oven better than the other. You will immediately see which pizza you want before we make it to the similarities between them.

The first and most obvious difference between the Ooni Pro and Ooni Fyra is the size. They might be similar in design, but their size is different because they come from different series.

The Ooni Fyra sticks to the reputation of Ooni of making portable pizza ovens. They have been making pizza ovens that can fit in small bags that you can use for traveling.

Ooni Fyra is only 13.7 inches wide which is pretty small compared to most ovens. However, you will have just enough room to cook 12-inch pizzas with a little bit of space to move them around.

It is also very light as it only weighs 22 pounds or just around 10 kilograms. You can bring this pizza oven to your friend’s house or in campings and tailgating trips for outdoor cooking. 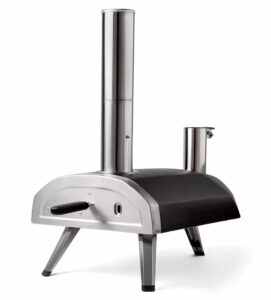 Ooni Pro is a part of a larger series that was doubted at first by users. See, Ooni pizza ovens could produce authentic pizzas with their heat because the chambers were small.

When they announced that they would be releasing larger pizza ovens, users doubted that the large ovens would produce the same amount of heat because of the large interiors.

However, the Ooni Pro pizza oven, at a weight of 48 pounds or 22 kilograms, produced the same results on the pizza that the users cooked with 16 inches of cooking space.

This pizza oven spans a little over 30 inches in length, so that you will need a long table for the setup. You can still bring it to tailgating trips if you have enough room in your car.

Airflow Control and Cooking with it

If you know anything about pizza ovens, you surely know that it needs to be well ventilated to keep the fire going. This will help you maintain the temperature inside the oven.

The Ooni Fyra uses a not-so-simple air circulation system that involves a chimney at the front. The firebox has vents where the air comes in and blows the fire upwards toward the opening.

When the air needs to escape, you can open the chimney situated at the pizza oven’s front. You can adjust the chimney with a small lever on the side and through the cap. 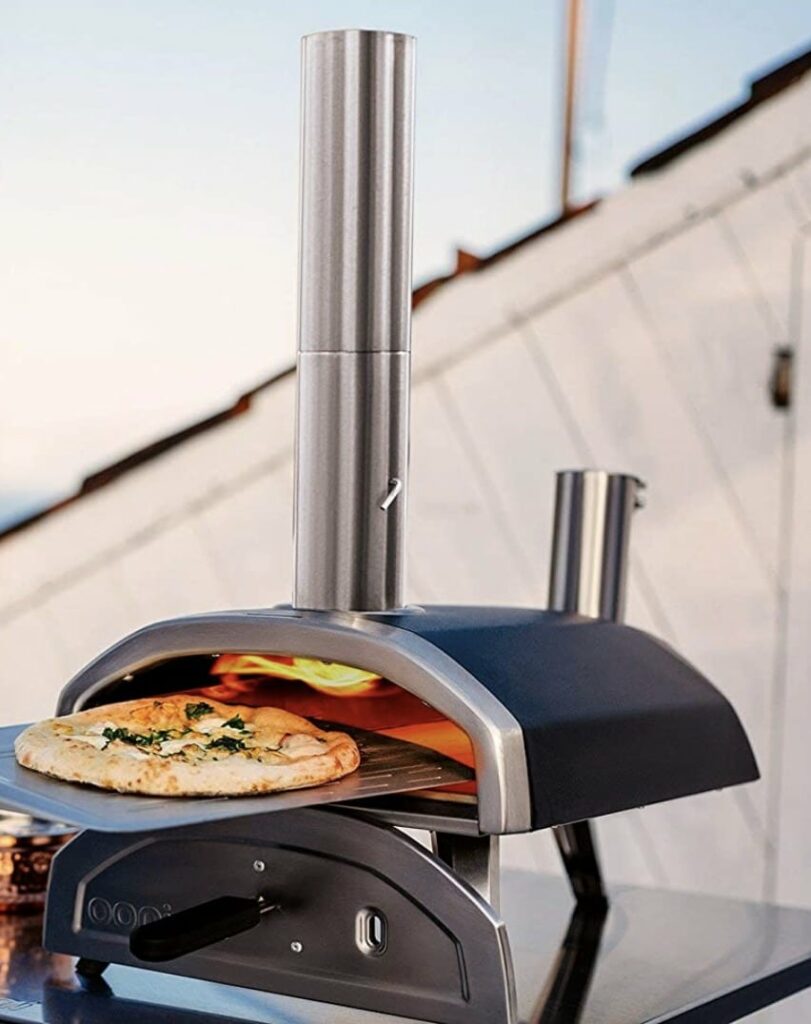 So when it is raining, you can cover the chimney, so water does not go into the pizza oven. Using the lever, you can still get the air out of the pizza oven to keep the fire going.

While the Ooni Fyra does a great job of circulating the air inside it, the Ooni Pro perhaps has the most advanced airflow system in any pizza oven from Ooni or any brand, for that matter.

See, the Ooni Pro does have a chimney too, but it does not rely on that all the time. The air that goes out of the chimney gets collected through the vents on the pizza oven ceiling.

That can sometimes be too much, and it blows too hard on the fire. Ooni designed a lever that closes the ceiling vent and gets the air out through another vent to reduce the airflow.

On the side of the pizza oven’s opening, two small holes collect the air inside and pass it in between the oven’s ceiling and shell and then out through the chimney.

This limits the amount of air that gets in and out of the oven while allowing proper ventilation so the fire will not run out of oxygen to keep it burning.

One of the newer additions to Ooni pizza ovens is doors.

They do have designs that allow them to keep the heat inside without the need for doors, but they retain it better with doors.

Both of these Ooni pizza ovens have doors to retain the heat inside them.

However, the Ooni Pro has two doors for you to choose from and keep the heat in two different ways.

There is a postbox-style door that covers the edges of the opening.

The middle is large enough to place the pizza in the oven without actually opening the door.

The other door is made with a slightly smaller opening to keep as much heat in the oven.

The small hole in the middle of the door is to look inside the oven without opening it.

The Ooni Fyra has a single door that functions quite like the second door of the Ooni Pro. It has a design that keeps the heat inside the pizza oven while also allowing you to look inside.

However, it has a smaller peephole to get just enough view of the interior of the oven. The peephole is only 1 inch wide, so you peep through the hole to see your pizza inside.

COOKING INSIDE THESE PIZZA OVENS

Now that you have seen the differences between the Ooni Pro and Ooni Fyra let us get into their similarities by looking into how well they perform when cooking pizzas.

Ooni makes sure that they make the best pizza ovens by keeping the performance as great as possible, no matter the size of their pizza ovens.

For these pizza ovens, they can both go up to 932 degrees Fahrenheit. The Ooni Fyra only takes 15 minutes for it to reach this maximum temperature and cook right away.

Since the Ooni Pro has a larger interior, it needs around 20 to 30 minutes to reach the maximum temperature. Either way, they can be used right away once they reach that temperature.

So, the larger interior of the Ooni pro helps you cook more dishes than the Ooni Fyra. You can insert two small cast iron pans inside the Ooni Pro at once, which would help you cook larger food quantities.

The maximum size of pizza you can cook inside the oven is 16-inches, which is a pretty good size because most portable pizza ovens can make pizzas of12 inches.

The Ooni Pro has another added feature is that you can switch between fuels. If you think you want to use gas as fuel, you can add a gas burner.

The Ooni Fyra is a pellet-fired pizza oven, and that’s all; you cannot switch fuels with this pizza oven, and if you want to make pizzas inside the oven, you have to stock up on wood pellets as the oven does need refueling quite often.

I like the Ooni Pro, which is the gas-fueled option since cooking with a gas-fueled pizza is much easier than wood pellets.

But that’s just my opinion. Many find it way easier to cook with wood pellets and prefer doing that compared to cooking with a gas-fueled oven.

The choice you get with Ooni Pro makes it better as you get pizzas cooked with different fuels rendering a different flavor to each pizza cooked.

With so much power and heat, you can cook pizzas in just 60 seconds. The crust will be very crispy, and the toppings cook to perfection along with the melted cheese.

If you want something that will help you cook the best pizza for your friends and family, then Ooni has the right pizza ovens for you in the form of the Ooni Pro and Fyra.

They can put the same power that you need and keep the fire going after a long time. They have great ventilation, so the fire will keep on going until you run out of fuel.

Baking stones are also important in retaining heat. All Ooni pizza ovens have a cordierite pizza stone. You will also like the Neapolitan style pizzas to cook inside the oven for under a minute.

The Ooni Fyra is a small, portable wood pellet pizza oven that cooks 12-inch size pizzas. On the other hand,, the Pro, which is relatively heavier and multi-fueled, also cooks the best 16-inch pizza.

Spread the love
Previous Post: « Best Tips and Tricks On Cooking A Pizza On THE Kamado Grill
Next Post: Why I feel Ooni Pro 16 is better than the Ooni Karu Pizza Oven?- Ooni Pro 16 vs Ooni Karu »