One of the most popular cuts of meat on the market is the ribs. There are some common ribs out there, so between the St. Louis Style Vs. Baby Back Ribs, which bones should you pick?

There is a lot of cuts of meat that contain delicious and nutritious meat. Ribs are one of the favorites during barbecues or grill sessions as they are tender and full of flavor.

The baby back ribs are pretty common, and they are some of the best ribs since they are tender and beefy. The St. Louis style ribs are also pretty popular for the same reason and more.

So there is this existing debate on which type of ribs is better. That can be found out by looking into the different details that come in with the ribs you choose and the cooking style.

These ribs are different from each other in terms of the process, location, flavor, and more. So these two are often confused with each other since they are very close on some parts.

They are easy to cook or prepare, but there is also a difference between the process. So let us see the significant differences between these two types of ribs so you can choose.

What Makes Them Similar?

Baby back ribs and St. Louis Style ribs come from the same part of the pig. There are also other types of ribs cut from the same animal that you might also prefer.

One of the major reasons these two types of ribs compare to each other is because they are technically connected when you butcher a pig and get separated according to orders.

The rib cage of the pig contains less fat content compared to some areas. Despite that, this part of the pig also helps in tenderizing the meat.

The bones have a contribution to the tenderness of the meat. The actual ribs allow the meat to subside when cooked without letting the juice out so it stays soft and flavorful. 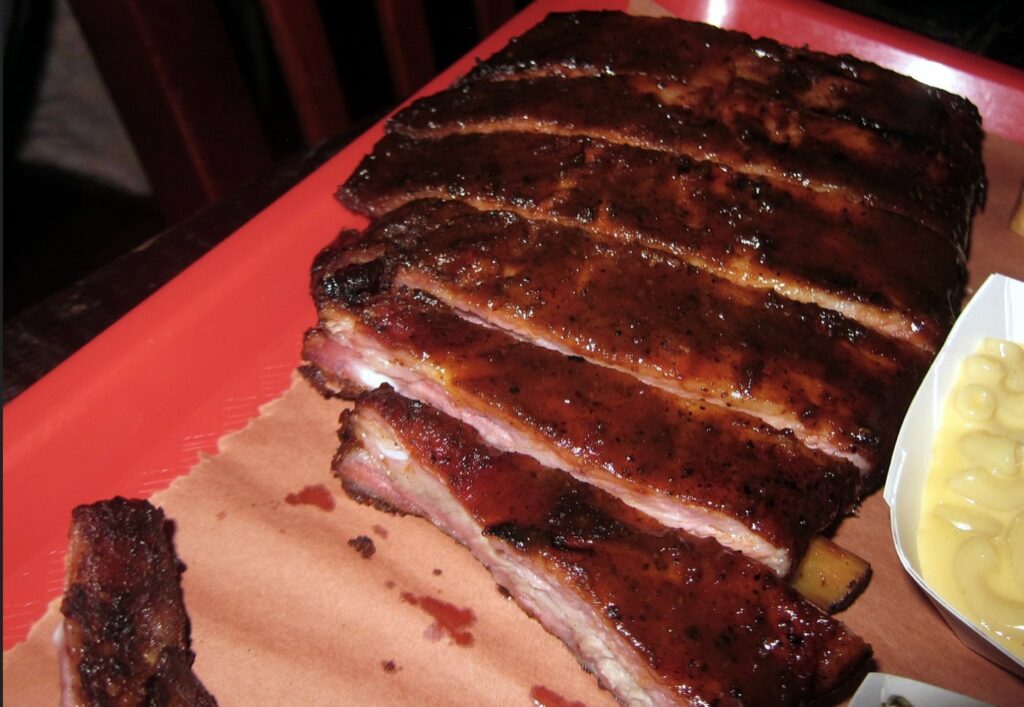 The St. Louis style ribs are cut on the same area, only lower than the baby back ribs. The ribs that cage the organs of the pig are where you get the St. Louis Style ribs.

Many people confuse these two with each other, which is reasonable since they have many similar qualities. However, they do differ in major points, such as flavor and softness.

These two cuts are also similar in terms of availability. Although the baby back ribs are more common, the St. Louis style is also a popular choice and is also available just like the baby’s back ribs.

Where Are The Baby Back Ribs Located?

Do not think that the baby’s back ribs are a cut from baby pigs just because of the name. It is the size of the baby back ribs that is responsible for the name.

This cut of meat is from the uppermost part of the ribcage. It is part of the rib connected to the backbone and is cut in a precise and much smaller way when butchered.

The rib’s length when the baby back ribs are relatively smaller than the St. Louis style ribs. That is why it has ‘baby’ in its name and not because they are from smaller or younger pigs.

The ‘back,’ on the name, of course, means that this meat cut comes from the part near the backbone. Right under the baby back ribs are the St. Louis style ribs.

Where Are The St. Louis Style Ribs Located?

As we have mentioned above, the St. Louis style ribs exist just under the baby back ribs. They are connected and are only separated when the pig gets butchered.

This gives the St. Louis style ribs the same qualities you get from baby back ribs, at least on some parts. The location is important because it determines the tenderness of the meat.

The St. Louis style ribs are close to some cuts, such as the spare ribs. They have ribs cut before selling them, so this type of ribs has proportioned bones.

Unlike the baby back ribs, the St. Louis ribs do not have extra bones on the top part. This rarely happens when the baby’s back ribs are properly, but it does happen from time to time.

The rib tips are cut from the St. Louis ribs, giving it an even distribution of meat on each bone. Removing the tips also removes the part where there is less meat on the bone.

The typical baby back rib cut usually contains somewhere between 11 to 13 bones. The same is true for the St. Louis style, but their sizes or lengths are a bit different from each other.

The baby back ribs usually have 3-inch bones on the shorter side, while the longer parts can get up to 6 inches. This is because the part where they cut expands on some part of the pig.

The St. Louis style ribs are more even in terms of bone length and average between 5 and 6 inches. This is perfect for evenly cutting the ribs.

However, the bone can sometimes be the loss factor in terms of price. The baby back ribs have an average weight of 2 to 3 pounds with half of the bones’ weight.

The St. Louis style ribs also have this as the bone’s weight accounts for more than half of the cut’s total weight. A typical St. Louis style cut is somewhere between 2 to 3 pounds.

Baby back ribs are available according to the available parts, so they do not have uniform cuts. The St. Louis style ribs are a bit different since they are larger.

Before being sold, the St. Louis style ribs get trimming so that the bones and the meat have uniform looks that are more pleasing to the eye. They are tidier in terms of the cutting method.

How To Prepare Baby Back Ribs And St. Louis Style Ribs

Baby back ribs and St. Louis style ribs do not have much difference when it comes to preparation. You only need to season them to your liking and throw them into the smoker or grill.

The seasonings can be your favorite Barbecue rub or just a simple combination of salt and pepper. The flavor of the meat from the ribs will always come out as the highlight.

Coating the ribs with seasoning can be good if the meat is thick, but you just need to adjust the right amount. It is also good to coat the meat when you are cooking at low temperatures.

You can then prepare your favorite barbecue dip and enjoy the ribs after cooking. There are also some varieties in how you can cook these types of ribs depending on what you want. 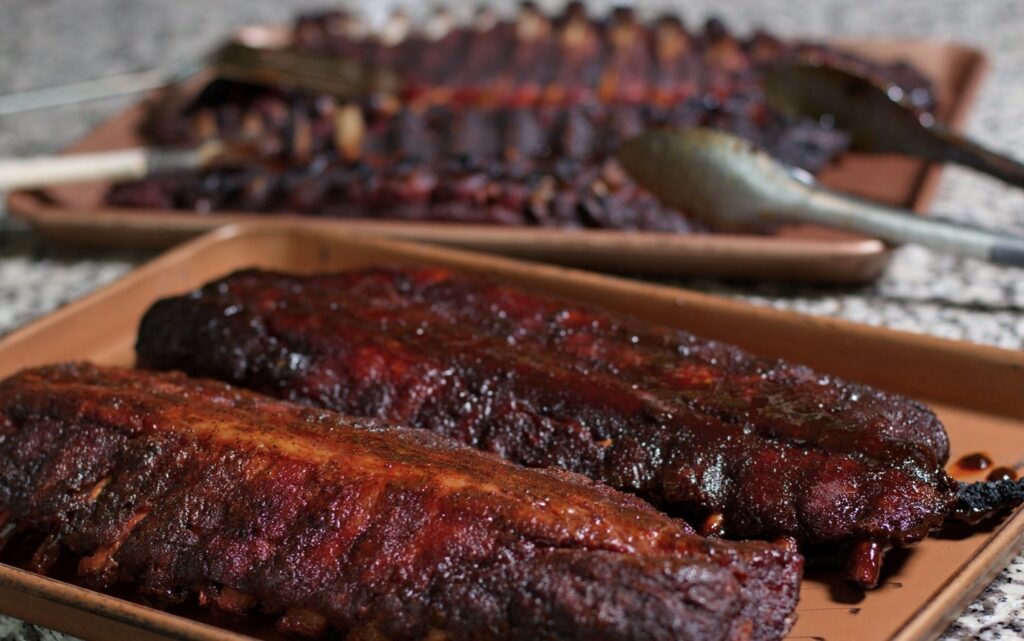 How To Cook The Ribs

The most common way of cooking ribs is to cook them at slow and low temperatures. Smoking the ribs will give you more flavor from the smoke from the wood you use.

It is also important to know what type of wood you use to enhance the meat’s flavors. That way, you will combine the best cooking style and smoky flavor with the meaty flavor.

Baby back ribs are tender, so you can also cook them on high heat. They do not harden after cooking them faster, but they do have better flavor if you cook them slowly.

St. Louis style ribs are a bit harder than baby back ribs, so they do not get the tenderness that you have in baby back ribs. They do, however, brown easily because of the even cuts.

You can get some beautiful and even brown on the St. Louis style ribs since the meat, and the bones are flat and even. You can brown the ribs by searing them for a bit in a pan.

The symmetry of the cut of St. Louis style ribs gives them an even surface which is easier to manage when you want to sear them a little bit before putting them into the smoker.

This is almost impossible to do with the baby back ribs since they have a curved structure. So unless you press down on the ribs while cooking, you will not get an even browning on them.

If you want that fall-off-the-bone tenderness, then it is best to smoke the ribs. That way, you get to experience the meat’s soft texture while also having a more flavorful set of ribs.

When it comes to storage and shelf life, the ribs need to be prepared and stored properly. If you are not planning to cook the ribs right away, you should put them in the fridge.

Seal the ribs by wrapping them with plastic wrap and then putting them in a sealed container. Put them on the coldest part of the refrigerator, and then you can leave them there.

However, you should cook them for five days to ensure that they are still fresh and safe to eat. Beyond that, bacteria might have entered and contaminated the meat.

The ribs will last longer in the freezer, so if you are not planning to cook them within the week, then do the same process and put them in the freezer to last up to three months or more.

If you have cooked the ribs and have some leftovers, you can also put the ribs on the fridge by wrapping them with either foil or plastic wrap before putting them in a sealed container.

Cooked ribs or any type of cooked food is to be stored only for up to four days. Beyond that, the food will have shown signs of spoilage and bacterial contamination, which is not safe to eat.

Serving the ribs is pretty similar, and you can enjoy them with a salad or other side dishes. Ribs are the perfect meal for when you want a large meal with a lot of meaty flavors.

They are the best cooked in a low and slow cooking style; that way, you can enhance the meat’s flavor and enjoy a tender fall-off-the-bone texture.

As a person with a huge appetite, I prefer the St. Louis style ribs since they have more meat. They are also more flavorful compared to the baby’s back ribs.

However, if you prefer not eating too much or controlling your diet, then the baby back ribs are the better choice for you.

Spread the love
2
2
Shares
2
Shares
2
Previous Post: « What Is A Chuck Eye Steak
Next Post: The Best Way To Cook A Chateaubriand  »