There are many cuts of meat to choose from, and they are all great. One of the not-so-common ones is a type of fillet called Chateaubriand, we have the best way to cook a Chateaubriand for you.

It is from a cow and has almost pure muscles. It does have a little bit of fat content in it but compared to most cuts; this one is not for proper marbling or searing alone.

It takes a few processes for you to cook it properly. You will have to make sure that you use the right ingredients and process to make this cut of beef tender and easy to eat. 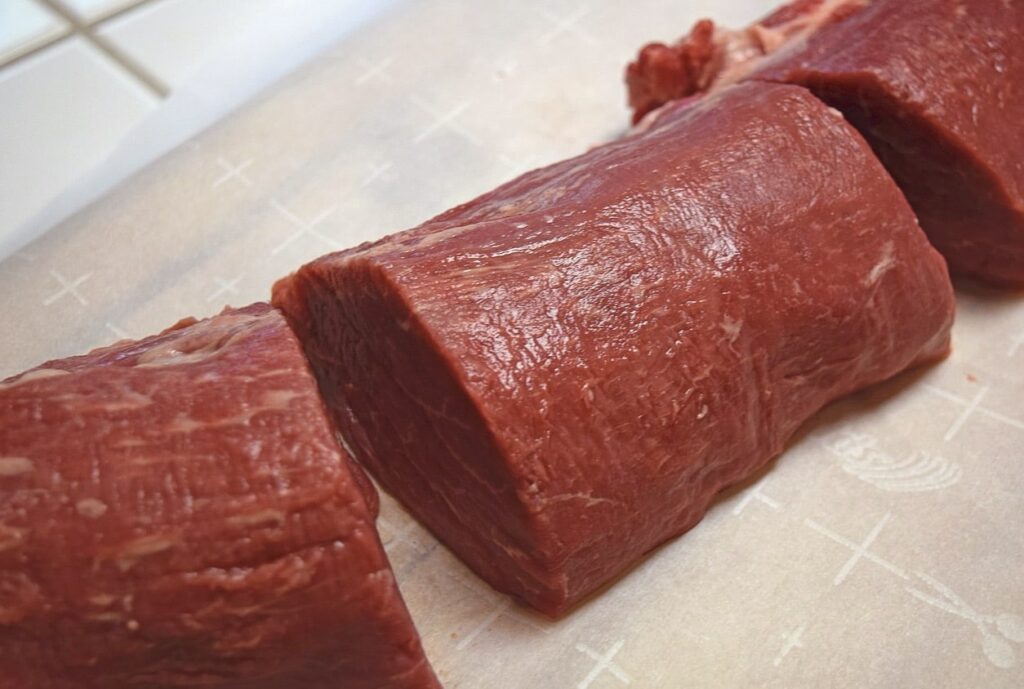 Of course, there are different suggestions on which or how to cook this cut of meat. However, we have the best way to do it, and the guide will let you know about the whole process.

Some tips will help you choose the best cut and cooking for this meat. That way, you will have the best meat-packed amount without wasting your time and money.

By following these simple instructions, you will be cooking the Chateaubriand with ease and precision. With just a few steps, the cut of meat will be a delicious, restaurant-quality meal.

What Is A Chateaubriand?

Some people are still confused about whether a Chateaubriand is a cut of meat or a process of preparing the cut of meat. Simply put, it is a little bit of both with the difference being the name.

You need to add ‘roast’ to know which one is the process of cooking. Chateaubriand is the cut of meat made for a Chateaubriand roast and contains many hard muscles in it.

The center cut of the beef tenderloin means that it has a lot of meat. That can be considered as Chateaubriand but some may say that it should undergo some process.

Most people would say that the cut alone is just a part of the tenderloin and you need to prepare it first with red wine, demi-glace, and other ingredients before it is considered a Chateaubriand.

So no matter what you believe a proper Chateaubriand should be, what matters the most is that you begin with the best cut of meat. That is what the part of the tenderloin provides.

It is also important that you know how to make the most out of your money when buying this cut of meat. Here are a few pieces of advice that you can follow to get the best cut of meat.

While it can be disappointing, it is a professional’s work. The cut in the middle of the meat is where a thick silverskin exists so the butcher should know how to remove that.

This makes the process a lot easier for you when cooking. You do not have to deal with the hard and rubbery part of the meat to easily let the spices and heat pass through the meat.

This not only removes the hard part but it is cleaner when eaten. You do not have those unnecessary cuts of ligaments or silverskin on your plate and you can eat it all the way.

The Best Way To Cook A Chateaubriand

When you talk about the best way to cook a Chateaubriand or any type of food, for that matter, it is always subjective. So this technique might not cater to what is available around you.

However, when it comes to this meat cut, I would say that the best way to cook it is to do a reverse sear. This simply means that you let the meat tenderize a bit first before searing it.

Since this beef cut is a little hard, you will need more than just the quick and hot process. You need to get the cooking process inside the meat before searing its outer parts.

This type of cooking process is also great with thick cuts of meat. That is why the Chateaubriand cooks using this method to make sure that the meat softens slightly. 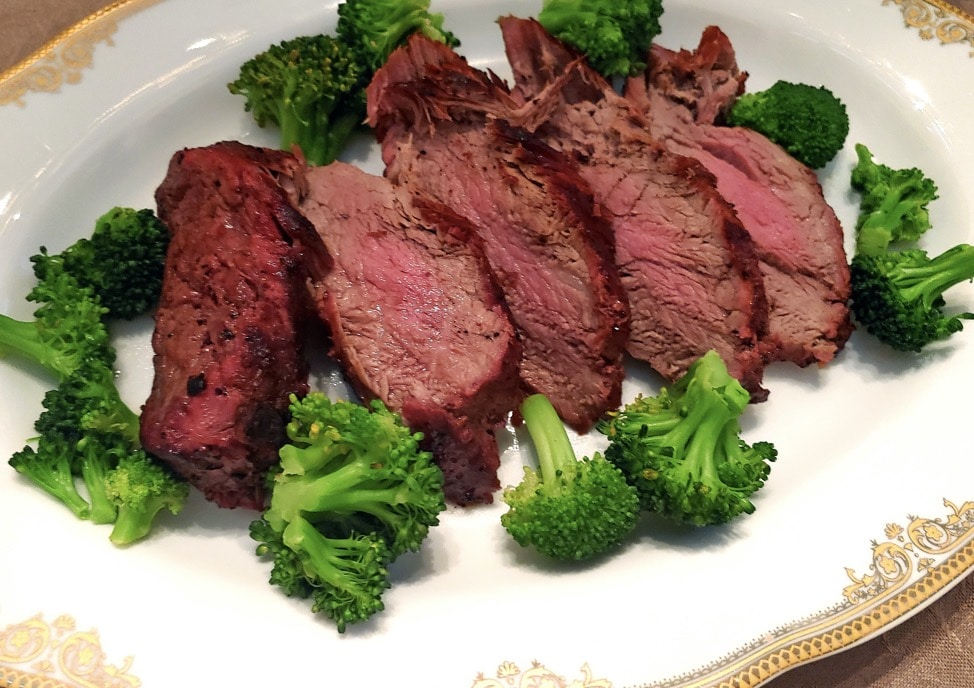 If you buy your Chateaubriand frozen, then you should let it defrost first. Remove the meat from the packaging and release the frozen parts until it reaches room temperature.

After reaching room temperature, let the cut of meat rest for about 30 minutes. This will help make the meat juicier and tender when cooked.

With this meat cut, you do not have to go all out with the spices and seasonings. You need to let the meat’s flavor stand out and so be generous but not too much with the seasonings.

There is also no need for you to make or buy special rubs as this cut of meat already has an amazing beefy flavor. A little sprinkle of sea salt and pepper around the meat will be enough.

There is a tendency where the pepper gets burnt during the slightly long process so if you do not want the sour taste that comes with it, you should not put too many peppers in it.

If, however, you prefer the aroma of the grounded pepper blending with the beefy flavor, then you can do that too. Again, it is a matter of personal preference so you can add any seasoning.

How To Cook It (A Quick Recipe)

There are no complicated instructions for cooking this type of meat. However, if you want to make the most of it, we have a very simple yet effective method for cooking it.

The first step includes the preparation of the meat which means that you will need to defrost it. While doing so, you need to prepare your cookware and then preheat the oven or grill.

The temperature of the oven or grill should be 235 degrees Fahrenheit. If you are using a grill, then set it at the same temperature but if possible, put the grill on a two-zone cooking setup.

I prefer using a grill when cooking the Chateaubriand cut of meat since I can make it cook on one side at a certain temperature while also making the other side available for another type of cooking.

While waiting for the grill to preheat, check if the Chateaubriand has reached room temperature. If it has, then start rubbing it evenly with a thin layer of oil and then put about a teaspoon of salt.

Spread the salt evenly as well to make sure that the meat gets all the flavor. You can add ground peppers but do not overdo it or else the flavor will overpower the taste of the meat.

Make sure that the potatoes come coated with oil and other spices. Place them in a large cast-iron pan where the potatoes slices spread evenly and the meat should fit into the pan.

Since you will cook the meat and the potatoes for quite some time, you need a heavy-duty pan. That is why I use a cast-iron pan but a thick stainless pan will do.

You can mildly slow the cooking process down by putting a knob of butter in the potatoes’ middle. Place the Chateaubriand on top of the potatoes and then place it in the grill.

Make sure to leave a meat probe in the thickest part of the meat. Put the pan on the grill or straight into the oven and and wait for it to cook all the way through.

Once the meat’s internal temperature reads 125 degrees Fahrenheit, remove it from the oven or the grill. At this temperature, the meat would cook into a medium-rare finish.

Cooking the meat further will be good but I do not recommend going over the 125-degree mark. Such cuts of meat with so much lean will tend to dry out when cooked further than medium-rare.

After the meat has been cooked to medium-rare, remove it from the pan and then let it rest for about 5 minutes. Increase the temperature on the grill while the meat is resting.

It is best to wrap the meat with foil to keep the internal temperature stable and for the meat to continue cooking a bit. This will help the meat reach a juicier finish even after it the searing.

Set the temperature of the grill or the oven to 425 degrees Fahrenheit. This will be the temperature enough for the meat to get that charred and slightly crispy finish on the outside.

If you are using your oven, place the meat back on top of the potatoes. Put them back in the oven and let the meat cook for 2 minutes flip it over, and then let the other side cook for another 2 minutes.

When cooking it on the grill, place the meat directly on the grill grates. Let it sear and turn constantly and let all sides cook for 2 minutes to get the perfect crust on the meat.

Slice the meat into thin cuts about half an inch thick. Spoon some of the drippings on the pan and then drizzle it over the potatoes and the meat then put some greens before serving.

The meat should be tender and can be ripped simply by biting on it. You can also drizzle some of your favorite barbecue sauce over the meat but the meat alone is great so that is optional.

Some great sides pair well with the Chateaubriand meat. You can go with salads or just go with the potatoes and then have some wine on the side with it.

The Chateaubriand cut of meat is the perfect meal for when you want a delicious, lean, and beefy option. It is full of proteins with as little fat content compared to other cuts of meat.

You can make it with many side dishes so the options for making it more flavorful are virtually endless. Get the best out of the Chateaubriand by cooking it in the best way possible.

There are also some other ways to cook this cut of meat, but I prefer the reverse sear process. It softens the meat while also giving you the perfect crust like the one you see in steaks.